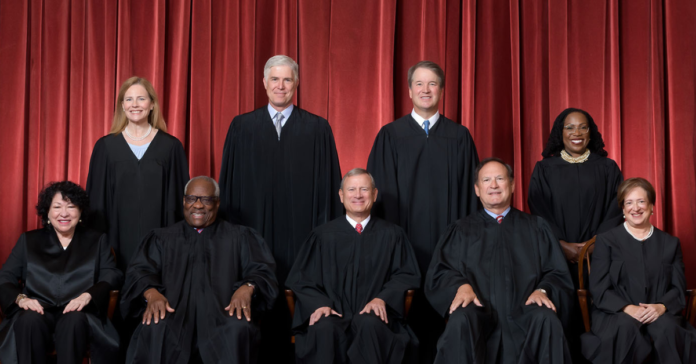 The Supreme Court on Tuesday allowed former President Donald Trump’s Title 42 immigration policy that allowed our government to expel asylum-seekers at the border to remain in effect putting a judge’s ruling that would have ended it soon on hold.

The court voted 5-4 to grant an emergency request by 19 Republican state attorneys general who sought to intervene in defense of the policy because our southern states are getting overrun.

Texas GOP Gov. Greg Abbott was happy with the decision saying: “BREAKING: Supreme Court orders Title 42 border restriction to be kept in effect.” Neil Gorsuch joined with the liberal justices and said in his dissent: “The current border crisis is not a COVID crisis.

“And courts should not be in the business of perpetuating administrative edicts designed for one emergency only because elected officials have failed to address a different emergency. We are a court of law, not policymakers of last resort.”

The 5-4 order is a victory for Republican-led states that urged the Supreme Court to step in and block a lower court opinion that ordered the termination of the authority.

The Biden administration has said it was prepared for the authority to end and had put in place precautions to guard against confusion at the border and any potential surge of migrants.

In its order, the court also agreed to take up the states’ appeal this term. The court said it would hear arguments on the case during its argument session that begins in February 2023.

Justices Sonia Sotomayor and Elena Kagan said they’d deny the application, but they did not explain their thinking. Conservative Justice Neil Gorsuch also dissented and explained his thinking in an order joined by liberal Justice Ketanji Brown Jackson.

BREAKING: The Supreme Court keeps the Trump-era Title 42 border policy in effect for now. The court says it will hear argument in February over whether red states can intervene in the litigation over the policy. The vote is 5-4, with Neil Gorsuch joining the three liberals.

The court’s brief shadow-docket order, along with a two-page dissent written by Gorsuch, is here: https://t.co/btzyUwibkp

Full coverage on the court’s decision coming soon from @AHoweBlogger on https://t.co/Tzv3IY7gwN. Background on the case is here: https://t.co/5e0GGB9D8v

BREAKING: SCOTUS rules Title 42 must remain in place at the border while legal challenges play out. @FoxNews

However, it continues to be used less and less due to diplomacy, as there are certain nationalities that MX won’t take back & home countries won’t accept repatriation.