Marjorie Taylor Greene Overrules Adam Schiff:  “You deserve to be kicked off committees for lying to the American people” 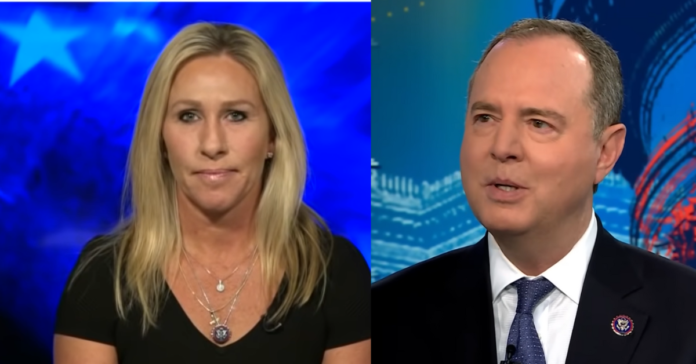 Rep. Marjorie Taylor Greene overruled Rep. Adam Schiff after the California Representative whined about losing his committee assignments when the GOP takes over the House.

Adam said: “Well, this is the same false equivalence they often use, which is, Marjorie Taylor Greene and Paul Gosar were removed from their committees because they were inciting violence and fellow members of Congress.

“The day I start to incite violence against people I serve with or elsewhere, then fine, take me off my committee. The moment I start engaging in insurrection, then fine, sanction me.

“But don’t give me this false equivalence Mr. McCarthy and suggest that somehow leading legitimate investigations of Donald Trump’s corruption with Russia, Ukraine, and January 6 is somehow a legitimate basis to remove someone from their committee.”

You deserve to be kicked off committees for lying to the American people and supporting BLM violent riots all over America @RepAdamSchiff along w/ many of your colleagues.

Greene wasn’t buying Adam’s whining and warned him he will be kicked off his precious committees:

“You deserve to be kicked off committees for lying to the American people and supporting BLM violent riots all over America @RepAdamSchiff along w/ many of your colleagues.

“I’m looking forward to watching @GOPLeader remove you from committees.”

Schiff also tried to clear the field and take the inside track on replacing Senator Dianne Feinstein (D-CA) who most expect to retire in the new year. He said:

“Look, I am getting a lot of encouragement to run for the Senate from people in California and colleagues here in Congress.

“If Senator Feinstein retires, then I will give it very serious consideration.

“It’s a great responsibility, and in terms of continuing the work I’ve been doing to protect our democracy and fight for an economy that works for everyone, that would also give me a chance to try to meet those objectives for all Californians.

“But, you know, at this point, I think we’re waiting to see what Senator Feinstein has to say about her plans, but, yes, it is something I’m giving serious consideration to.”

“Yes, it is something I am giving serious consideration to…”@RepAdamSchiff talks a potential Senate run in 2024.

He says he is getting encouragement to run from people in CA and Congress, but is waiting to see what @SenFeinstein does.@Elex_Michaelson hosts @TheIssueIsShow pic.twitter.com/3UsDispJ0f

If You Own This Samsung Washer, Stop Using It Immediately... It's Being Recalled Because It's a "Fire Hazard"

Christian Actor Reveals He Was Removed From the Set of "Desperate Housewives" Over His Faith...