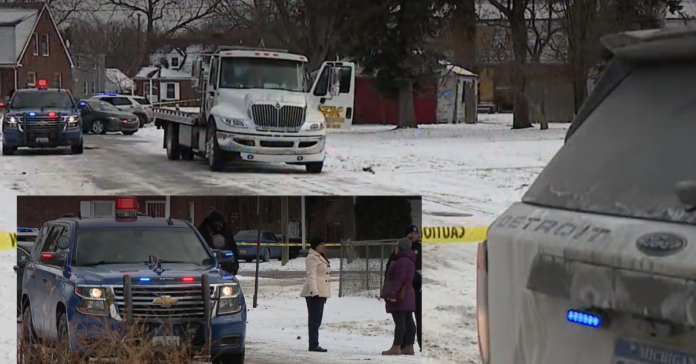 A tow truck driver shot and killed an armed thug who tried to ambush and rob him on Detroit’s east side Monday. Police are investigating the incident but said the shooting was self-defense.

“I heard multiple gunshots, around six to eight,” said one neighbor. “You have to get these crooks off the street on way or another,” he added. According to FOX 2 Detroit:

“Police said the truck driver was meeting with the suspect to buy a junk car in the area of 7 Mile and Kelly when he was ambushed around 9:35 a.m. The driver, who is a CPL holder, pulled out a gun and fatally shot the suspect.”

“The shooting happened around 9:30 a.m. Monday (Dec. 26) in the 15400 block of Young Street on Detroit’s east side.Officials said a man with a gun tried to rob a tow truck driver, but that driver was a CPL holder and also armed.”

As our cities descend into lawlessness citizens are stepping up to stop the carnage. A 23-year-old woman with a concealed-carry permit shot a carjacker in the head in Chicago last month.

Dec. 26, 2022: Detroit police say that an armed tow truck driver who fatally shot a man did so in self-defense after the man tried to rob him when he showed up to buy the man’s “junk car.” The tow truck driver has a concealed carry permit. https://t.co/utiCIjVkkW

When one of the would-be carjackers tried to open her door while flashing his gun, she grabbed her weapon and shot the man in the head.

The woman exited her car and fled the scene. One of the carjackers opened fire on the woman. She was shot in the arm. The woman was taken to Advocate Trinity Hospital.

The man she shot was taken to the University of Chicago Medical Center and was in critical condition. The other three attackers got away.

Crime has spiked in the Windy City in the last year, with homicides reaching an all-time high in a quarter-century in 2021.

In just one hour, seven carjackings were reported on Chicago’s West Side on Friday morning, police confirmed to Fox News Digital.

Vehicle thefts have been on the rise in Chicago this year. According to the Chicago-based television news station WBBM-TV, there were more than 3,000 vehicle thefts last month, making October the month with the largest number of car thefts in Chicago in about 20 years.

As of November 20, Chicago Police Department data showed 17,700 vehicle thefts had been reported since the beginning of the year.

Police in Detroit say an armed robber is dead after a tow truck driver shot and killed him.https://t.co/bhnccVlEeM

Joe Biden Hangs Head In Shame: More Illegal Immigrants Caught in October-November Than In All of 2020 According to CIS Report

And Of Course, The Debt Ceiling Discussion Is About To Be Front And Center