Joe Biden Hangs Head In Shame: More Illegal Immigrants Caught in October-November Than In All of 2020 According to CIS Report 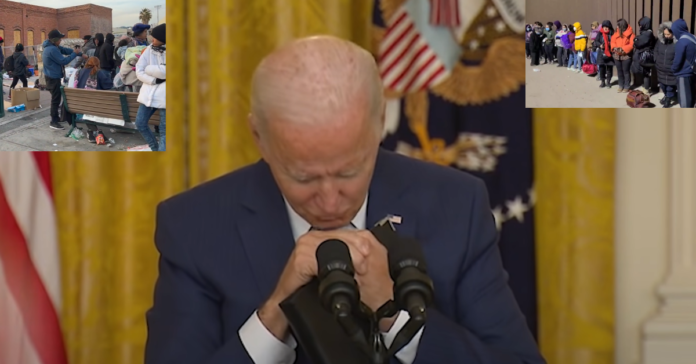 Arthur wrote: “In November, agents at the Southwest border apprehended more than 206,000 illegal migrants, an increase over October’s apprehension totals (just fewer than 205,000), and the highest total for that month ever (records go back to November 1999).

“There are any number of ways to look at last month’s apprehension totals, and none of them are good. Agents at the Southwest border set a new apprehension record in FY 2022, when they caught more than 2.2 million illegal entrants, blowing away the old record (set in FY 2021) by more than 547,000.

“November is the second month of the federal government’s new fiscal year, and last month agents apprehended nearly 40,000 more illegal migrants than they did in November 2021 — a 23 percent increase.

“Only Going to Get Worse. As bad as these apprehension numbers are, they’re only going to get worse once CDC orders, issued pursuant to Title 42 of the U.S. Code in response to the Covid-19 pandemic, expire. Those orders direct DHS to expel all illegal migrants at the nation’s land borders.

“Even though CDC’s Title 42 orders mandate the expulsion of aliens who have crossed the U.S.-Mexico line illegally, just fewer than 65,100 illegal migrants apprehended at the Southwest border were expelled in November under Title 42 — 31.6 percent of the total.

“That was the fewest migrants expelled under Title 42 in a month since January 2021, a month in which agents apprehended just over 75,000 illegal entrants and expelled more than 62,000 (an 82.7 percent expulsion rate).

“Why has the Title 42 expulsion rate dropped? The Biden administration doesn’t like Title 42, and the president tried to end the program in late May, only to be prevented from doing so by a federal judge in Louisiana on May 20.

“The judge in that case (federal district court Judge Robert Summerhays) issued that order in a suit brought by a coalition of states who were concerned that the end of Title 42 would lead to a surge of illegal migrants at the border.

“Concerned with good reason. In March, DHS estimated that up to 18,000 aliens per day would cross the Southwest border illegally once Title 42 ended. To put that figure into context, agents apprehended an average of 6,875 aliens per day in November, a record-setting month for apprehensions.

“That means that the number of aliens crossing the border illegally could more than double after Title 42 ends, and so Judge Summerhays’ order brought needed relief to already overwhelmed Border Patrol agents.

“It likely won’t last, because on November 15, a different district court judge (Emmet Sullivan of the U.S. District Court for the District of Columbia) ordered DHS to stop expelling illegal migrants under Title 42, effective December 21.

“Why anyone thought it would be a good idea to terminate Title 42 four days before Christmas is unknown, but in any event those states who brought the suit in Louisiana went to Chief Justice John Roberts and asked him to stay the expiration of Title 42 as ordered by Judge Sullivan, which he did on December 19.

“The chief justice’s stay is not permanent, but rather is intended to maintain the status quo while the Supreme Court weighs whether to hear those states’ appeal of Judge Sullivan’s order. If they decide in the coming days not to hear that appeal, the chief’s stay would be lifted, and Title 42 would end shortly thereafter,” he wrote.