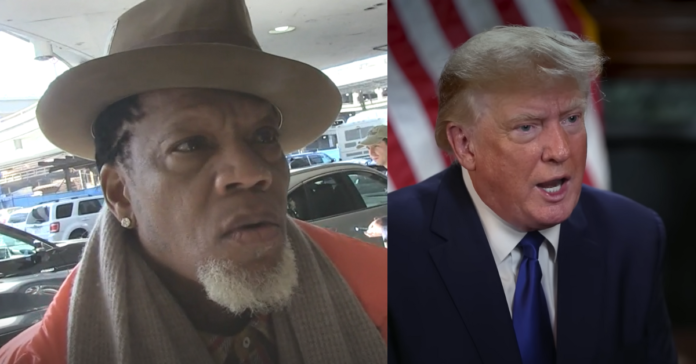 Hollywood star D.L. Hughley gave up the game and called for former President Donald Trump to be hit with manslaughter charges over the riot on Jan 6. Hughley said:

“Espionage to sedition to, you know, tampering with elections, I mean, you name it, he’s done it. I think he should be charged with manslaughter for that cop who died, even though it wasn’t at that event.

“I think he’s a f*cking criminal.

“He’s taking this country down a path that I don’t know that it will ever recover from.

“We all saw what happened, and justice isn’t about doing the thing we like, it’s about what we believe is to be right.

“He should be disqualified from running again.

“Anybody who tries to overthrow the will of the people and have armed people rise up and use white nationalists and skinheads to affect the results he wanted, he should automatically have been disbarred.

“Stop say out loud that nobody’s above the law because clearly they are.

“I think that everybody who believes he’s guilty will, will, and the people who are trying to argue that he’s not, they won’t believe it no matter what.

“The hardest people to try to convince are Trump fans and Kanye fans,” he said.

D.L. Hughley Says #Trump Should Be Charged With #Manslaughter For #January6 Riots – TMZ
There have been Black who have stolen cars but someone died and they’ve been charged for that crime. I WHOLLY agree with ⁦@RealDLHughley⁩
Charge #lhis ass! https://t.co/ssn9DvY8Zg