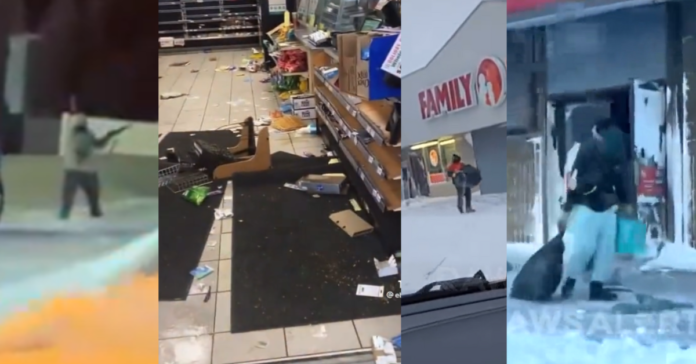 Buffalo officials said Monday multiple arrests have been made for looting after a historic and deadly winter storm hit western New York over Christmas weekend. But the cops couldn’t be everywhere and some store owners had to take up arms to stop the looters as you can see in the videos below.

“Our officers have responded to several reports,” Buffalo Police Commissioner Joseph Gramaglia said at a news conference Monday afternoon. “We have made a few arrests, we have intervened in some of those. We have assisted at least one location that I’m aware of in getting a store boarded up.”

Buffalo Mayor Byron Brown said: “People who are out looting when people are losing their lives in this harsh winter storm is just absolutely reprehensible.

“I don’t know how these people can even live with themselves, how they can look at themselves in the mirror. They are the lowest of the low.

“And from some of the pictures that we’ve seen in social media of these looters, they’re not looting foods and medicines.

Arab store owners are reportedly resorting to 2A justice to fend off looters in Buffalo because the cops aren’t around to stop their businesses from getting destroyed. pic.twitter.com/HtGoDvz1B3

“So, these aren’t even people in distress.

“These are people that are taking advantage of a natural disaster and the suffering of many in our community to take what they want from retailers – also, potentially putting emergency response services at risk in the communities where they are looting.”

“Price gouging is illegal and we have the attorney general’s office and our state is prepared to investigate any complains of price gouging.

“Those who engage in this disgusting practice at a time when people in our community are hurting, that they’re trying so hard to get basic necessities, there’s a scarcity because stores have been closed since Friday, well then, shame on them.

“And they’re going to meet the law in a way they probably did not encounter. So we’re going to be going after them.”

Store owners protecting their business
One begins firing toward the end of the video pic.twitter.com/L3iIqoGC1k

There’s looting in Buffalo NY b/c it snowed?????? pic.twitter.com/LItUw0T0zJ

The aftermath of mass looting today in Buffalo, NY following a storm: pic.twitter.com/sJPVOYgtj9

Christian Actor Reveals He Was Removed From the Set of "Desperate Housewives" Over His Faith...