Elon Musk Turns Tables On Ted Lieu, Catches Dem Rep “Linking to Misleading Data” On Twitter And Calls Him Out 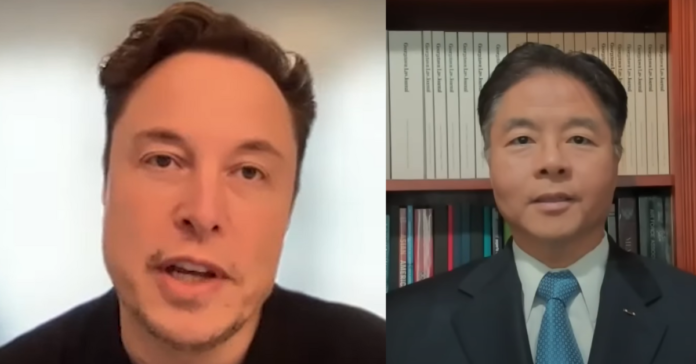 Elon Musk busted Dem Rep Ted Lieu “linking to misleading data” pn Twitter while trying to refute the latest installment of the Twitter suppression files. Musk released the Twitter Files about the virus and the lockdowns via David Zweig from The Free Press who said:

“Internal files at Twitter that I viewed while on assignment for @thefp showed that both the Trump and Biden administrations directly pressed Twitter executives to moderate the platform’s pandemic content according to their wishes.

“When the Biden admin took over, one of their first meeting requests with Twitter executives was on Covid. The focus was on “anti-vaxxer accounts.” Especially Alex Berenson…

“A December 2022 summary of meetings with the White House by Lauren Culbertson, Twitter’s Head of U.S. Public Policy, adds new evidence of the White House’s pressure campaign, and cements that it repeatedly attempted to directly influence the platform.

“Culbertson wrote that the Biden team was “very angry” that Twitter had not been more aggressive in deplatforming multiple accounts. They wanted Twitter to do more.

“Twitter executives did not fully capitulate to the Biden team’s wishes. An extensive review of internal communications at the company revealed employees often debating moderation cases in great detail, and with more care than was shown by the government toward free speech.

“But Twitter did suppress views—many from doctors and scientific experts—that conflicted with the official positions of the White House. As a result, legitimate findings and questions that would have expanded the public debate went missing.

“There were three serious problems with Twitter’s process: First, much of the content moderation was conducted by bots, trained on machine learning and AI – impressive in their engineering, yet still too crude for such nuanced work.

“Second, contractors, in places like the Philippines, also moderated content. They were given decision trees to aid in the process, but tasking non experts to adjudicate tweets on complex topics like myocarditis and mask efficacy data was destined for a significant error rate.”

16. Second, contractors, in places like the Philippines, also moderated content. They were given decision trees to aid in the process, but tasking non experts to adjudicate tweets on complex topics like myocarditis and mask efficacy data was destined for a significant error rate pic.twitter.com/lTISX00mo7

17 Third, most importantly, the buck stopped with higher level employees at Twitter who chose the inputs for the bots and decision trees, and subjectively decided escalated cases and suspensions. As it is with all people and institutions, there was individual and collective bias

25. A tweet by @KelleyKga, a self-proclaimed public health fact checker, with 18K followers, was flagged as “Misleading,” and replies and likes disabled, even though it displayed the CDC’s *own data.* pic.twitter.com/8ABQzYGpXf

Congressman-Elect Admits To Lying About Schooling, Job History During Midterms; Won't Step Down