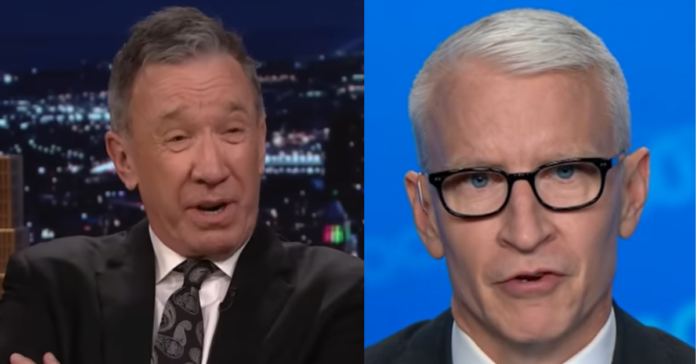 Hollywood star Tim Allen set CNN straight after the network’s new CEO complained about the state of the media in our country. CNN CEO Chris Licht said during a recent interview  that “so much of what passes for news is name-calling, half-truths, and desperation.”

Enter Tim Allen who said: “Hmmm…well said quote from the CNN new boss. Maybe a re-focus on accuracy not bs.”

Licht trashed uninformed liberals in the interview before saying his vision for the company is to make “CNN essential to society.” If he follows Allen’s advice he may get close to his goal.

Licht said: “The uninformed vitriol, especially from the left, has been stunning,” Licht told the Times.

Hmmm…well said quote from the CNN new boss. Maybe a re-focus on accuracy not bs.

CNN’s Chris Licht: “So Much Of What Passes For News Is Name-Calling, Half-Truths And Desperation”

“Which proves my point: so much of what passes for news is name-calling, half-truths and desperation.”

Licht said he wants CNN to offer a “rational conversation about polarizing issues,” so viewers can “take what they’ve heard to the dinner table and have a discussion.”

He said: “I want CNN to be essential to society. If you’re essential then the revenue will follow.

“That’s a dream of mine.

“But I’d rather try to win this way.”

Since joining CNN, Licht shook up the network’s morning lineup by moving host Don Lemon, an outspoken critic of former President Trump, out of his primetime slot and into “CNN This Morning” with

On moving Don Lemon to the morning show with Kaitlyn Collins and Poppy Harlow he said:

“The chemistry is great. I love the collaboration.

“Every day, it evolves. It’s not like me giving orders. It’s so much fun.”

Elon Musk Sets Record Straight: “To be totally frank, almost every conspiracy theory that people had about Twitter turned out to be true”