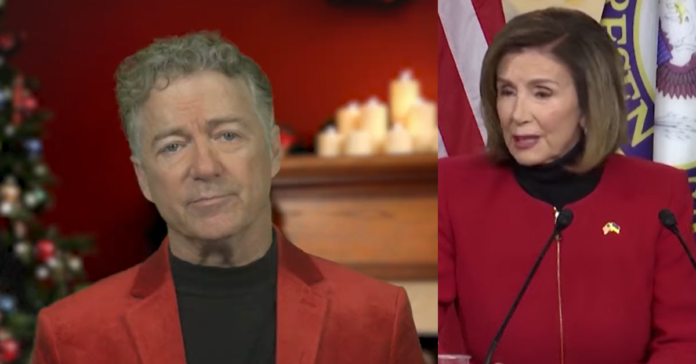 Senator Rand Paul (R-KY) reached his limit with Speaker Nancy Pelosi, Chuck Schumer, and Mitch McConnell calling the $1.7 trillion dollar omnibus spending bill an abomination. He dragged the bill in front of reporters for a press conference where he correctly said, “the American people don’t want this —they are sick and tired of it.”

Rand said: “When was it produced? In the dead of the night. 1:30 in the morning is when it was released. Whose job is it to produce this?!

“I brought along the 1.7 trillion, 4,000+ page Pelosi-Schumer omnibus spending bill that’s being fast-tracked through the Senate. This process stinks. It’s an abomination. It’s a no-good rotten way to run government. We’re standing up and saying No.”

He also unveiled his own version of “Twas the Night Before Christmas” about government spending. He says in the video below:

I brought along the 1.7 trillion, 4,000+ page Pelosi-Schumer omnibus spending bill that’s being fast-tracked through the Senate. This process stinks. It’s an abomination. It’s a no good rotten way to run government. We’re standing up and saying NO. pic.twitter.com/Wom6xKEeQh

“Twas the week before Christmas, and through the Senate and House, not a creature was stirring, not even a mouse. The earmarks were hung by the chimney with care, in hopes that St. Nicholas soon would be there.

“The senators were nestled all snug in their beds, while visions of pork danced in their heads.

“No budget was found, just mischief and debt. While the taxpayers hung their poor heads and wept.

“Now, McConnell! Now, Schumer! Now, Pelosi and Vixen! On Biden! On Stupid! On Dumber and Blitzen! To debt! To bankruptcy! To free money for all! Now dash, dash away, more cash for all!

“This spending season, instead of naughty and nice, Santa brought everyone something regardless of price.

“And don’t forget a delicious candy cane, sweet with $40 billion to tide over Ukraine. Because of the climate, it’s not PC to leave coal. No one seems to care, because we’re trillions in the hole.

“Don’t worry about leaving the budget a mess. Democrats have given you 87,000 agents of the IRS

“But I heard him exclaim, as he drove out of sight, ‘Happy bankruptcy to all, and to all a good night,’” he said.

🎄 I wrote and performed my own scary version of ‘Twas the Night Before Christmas 🎄 Enjoy! pic.twitter.com/IHI0uNyW0N