Elon Musk Reminds Schumer And McConnell Who’s Boss: “The public has spoken, they are overwhelmingly against this giant spending bill” 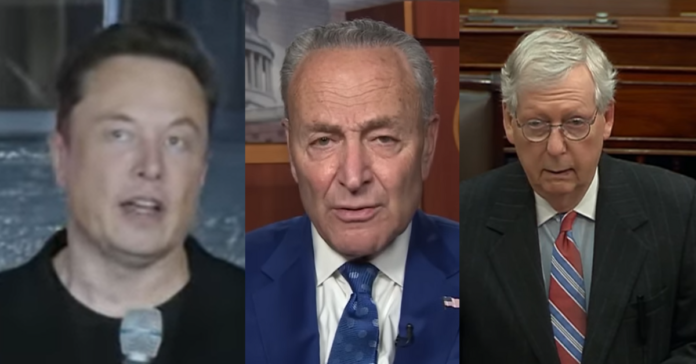 “I’m in favor of a small spending bill to keep things running, but common sense suggests that it be the least amount required through the holidays. Railroading through a giant spending bill that almost no one has read is unlikely to be in the best interests of the people.

Musk said: “@SenSchumer & @LeaderMcConnell, the public has spoken. They are overwhelmingly against this giant spending bill.”

.@SenSchumer & @LeaderMcConnell, the public has spoken.

They are overwhelmingly against this giant spending bill. https://t.co/2XTdPT9lQB

The spending bill is a cash grab and a power grab before the new Congress is sworn in on January 3. It takes a lot of power away from the incoming GOP majority in the House.

GOP Sen. Kevin Cramer said about Kevin McCarthy’s threat to block Senate Republicans if they pass the bill and neuter him:

“Statements like that and statements coming from House Republicans is the very reason that some Senate Republicans feel they probably should spare them from the burden of having to govern.”

Senator Rand Paul (R-KY) mocked the swampy way this bill came to pass in his own version of “Twas the Night Before Christmas.”

“Twas the week before Christmas, and through the Senate and House, not a creature was stirring, not even a mouse. The earmarks were hung by the chimney with care, in hopes that St. Nicholas soon would be there.

“The senators were nestled all snug in their beds, while visions of pork danced in their heads.

“No budget was found, just mischief and debt. While the taxpayers hung their poor heads and wept.

“Now, McConnell! Now, Schumer! Now, Pelosi and Vixen! On Biden! On Stupid! On Dumber and Blitzen! To debt! To bankruptcy! To free money for all! Now dash, dash away, more cash for all!

“This spending season, instead of naughty and nice, Santa brought everyone something regardless of price.”

🎄 I wrote and performed my own scary version of ‘Twas the Night Before Christmas 🎄 Enjoy! pic.twitter.com/IHI0uNyW0N

Matt Gaetz Reaches Limit, Threatens Mitch McConnell: “This omnibus is an assault on the American people, we will oppose and whip opposition to any legislative priority of those senators who vote for its passage”