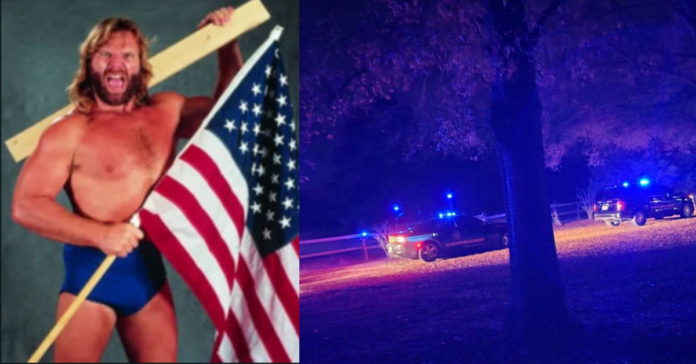 WWE Hall Of Famer “Hacksaw” Jim Duggan tackled a man who broke into his house and held him at gunpoint until the police arrived. Duggan said:

“We would like to thank the Kershaw County Sheriff’s Department for their prompt and professional response last week. A man who we had never seen before climbed our fence, ran through our yard to our front door, and was pounding on our glass doors.

“Before we could get to the door, he opened it and fell into our house. I held him at gunpoint while Debra called 911. We are safe with no damage.

“Thanks to everyone for the concern and well wishes.”

Thank you to the @KershawCountySC Sheriff’s Office and thank you to my fans and friends for the well wishes!https://t.co/DtR7TcnI9V pic.twitter.com/Jek2eVLjzx

Duggan later told a wrestling magazine there was a plot twist to the story. It seemed the man was running away from ‘people trying to kill him’ and was looking for refuge.

“The intruder, who the Duggans described as hysterically frightened, claimed that people from a nearby home were coming after him to kill him, after which Duggan kept his gun on his lap and his hand on the intruder’s back until the police arrived.

“According to Duggan, the intruder was fleeing individuals related to a separate legal matter, leading him to seek refuge; the intruder reportedly pounded on multiple other doors before climbing over the Duggans’ fence and entering through their unlocked door.

Duggan did not press charges when asked, letting the Kershaw County Sheriff’s Department apprehend the intruder.

HO HO HOOOOOOO!!! Make it a very #MerryChristmas for someone when you order a Cameo from me, TOUGH GUY!https://t.co/u9vxE0TCCA pic.twitter.com/2TBl8cRISn

My latest exclusive on @WrestlingInc – don’t mess with @RealHacksawJim, tough guy! Spoke with the HOFer about a wild situation! 👍🇺🇲