Trump Fires Back At Liz Cheney, Knocks Her Off High Horse: “Liz Cheney lost by a record 40 points” 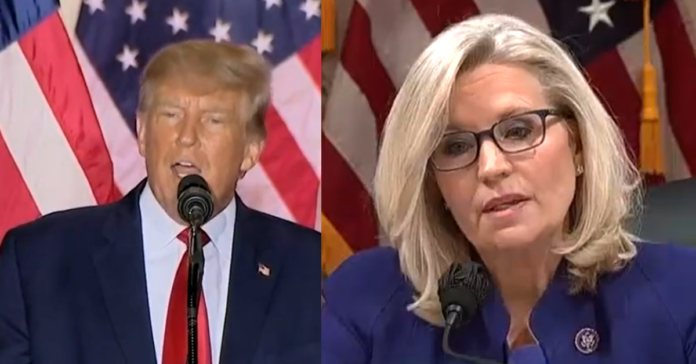 Former President Donald Trump fired back at soon to be out of a job Liz Cheney after the Wyoming Rep trashed him during a Jan. 6 committee hearing. The Jan 6 committee had its last public hearing yesterday where they officially referred Trump and others to the Department of Justice for prosecution.

Cheney said: “Among the most shameful of this committee’s findings was that President Trump sat in the dining room off the Oval Office watching the violent riot at the Capitol on television.

“For hours, he would not issue a public statement instructing his supporters to disperse and leave the Capitol, despite urgent pleas from his White House staff and dozens of others to do so. Members of his family, his White House lawyers, virtually all those around him knew that this simple act was critical.

“No man who would behave that way, at that moment in time, can ever serve in any position of authority in our nation again.

“No man who would behave that way, at that moment in time, can ever serve in any position of authority in our nation again,” Jan. 6 committee Vice Chair Rep. Liz Cheney says of former President Trump.

“He is unfit for any office.” pic.twitter.com/OTSMZueCxz

“He is unfit for any office.”

Trump fired back on Truth Social reminding Cheney about her epic loss:

“But Liz Cheney lost by a record 40 points!”

“We propose to the committee advancing referrals where the gravity of the specific offense, the severity of its actual harm, and the centrality of the offender to the overall design of the unlawful scheme to overthrow the election, compel us to speak,” Rep. Jamie Raskin said.

“Ours is not a system of justice where foot soldiers go to jail and the masterminds and ringleaders get a free pass.

“Even if it were true that President Trump genuinely believed the election was stolen, this is no defense.

“No president can ignore the courts and purposely violate the law no matter what supposed ‘justification’ he or she presents.”

“There should be no question that Section 1001 applies here. The false electoral slates were provided both to the Executive Branch (the National Archives) and the Legislative Branch,” the committee wrote.

“The statute applies to ‘any matter within the jurisdiction of the executive, legislative, or judicial branch of the Government of the United States.’ It is well established that false statements to Congress can constitute violations of Section 1001.”