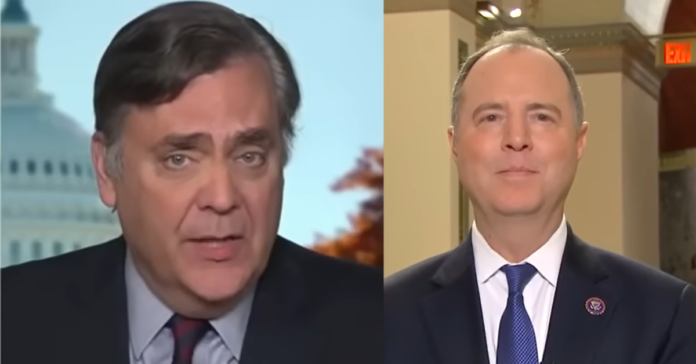 Legal scholar Jonathan Turley overruled Adam Schiff and his January 6 Committee saying they did not have enough for a credible case despite referring the case to the Department of Justice. Turkey wrote:

“The Committee repackaged largely the same evidence that it has previously put forward over the past year. That is not enough. Indeed, the reliance on a new videotape of former Trump aide “Hope Hicks seems a case of putting “hope over experience” in the criminal Justice system.

“While still based largely on the failure to act, Rep. Adam Schiff (D., Cal.) insisted that “if that’s not criminal, nothing is.” The opposite may be true from a First Amendment perspective. If the failure to act is criminal, it is hard to see what would not be criminal under this standard.

“The failure of the Committee to offer any new and direct evidence of criminal conduct was obvious at the outset. Vice Chair Liz Cheney began her remarks by again detailing what Trump failed to do. It was a repeat of the prior hearings and for some likely left the impression of actors who are refusing to leave the stage long after the audience departed.

“The media also downplayed the glaring failure of the J6 Committee to produce what it described as bombshell evidence of a criminal conspiracy by Trump. Members like Rep. Adam Schiff (D., Ca.) repeatedly promised that the next hearing would reveal such direct evidence only to have the same rehashing of the prior claims for prosecution.

“The Committee was playing to the same audience and knew that they did not have to produce such evidence to make their case. Experts like Harvard law professor Laurence Tribe have previously declared Trump’s felonies were shown “without any doubt, beyond a reasonable doubt, beyond any doubt, and the crimes are obvious.” That included what Tribe suggested was a clear case of attempted murder of former Vice President Pence.

“Likewise, experts like legal analyst and Michigan Law Professor Barbara McQuade told MSNBC viewers that Trump could be charged with manslaughter over the riot.

“The problem is that crimes actually require satisfaction of underlying elements and cannot be proven by soundbite or desire alone.

“Instead, much of the evidence cited what an official failed to do. Yet the last hearing seemed to focus on a number of things that did not occur, from a draft tweet that was not sent to an executive order that was never signed.

“There were discussions of appointing Trump attorney Sidney Powell as a special counsel, seizing voting machines or replacing the Justice Department’s leadership. It is a chilling list, but it is also notable in that no final action was taken on such proposals.

“That is a far cry from evidence showing mens rea — “guilty mind.” However, crimes generally require both guilty minds and guilty acts. Building a criminal case on the failure to act to stop the violence is a notoriously difficult case to make.

“The most damning evidence concerns what Trump failed to do in those 187 minutes.

“However, while repeatedly omitted by the Committee, Trump told his supporters to go to the Capitol “peacefully” to support Republicans challenging the election. At 1:11 p.m., Trump concluded his speech. Around 2:10 p.m., people surged up the Capitol steps. At 4:17 p.m., Trump made his statement to stop — roughly an hour and a half later.

“That speech appears protected by the First Amendment and existing Supreme Court precedent. In Brandenburg v. Ohio, the Supreme Court ruled in 1969 that even calling for violence is protected under the First Amendment unless there is a threat of “imminent lawless action and is likely to incite or produce such action.”  The Trump speech, in my view, falls well below that standard for criminalization.

“Despite the broad condemnation of Trump for his speech and conduct on that day, there is a difference between what is viewed as reprehensible and what is chargeable as criminal conduct,” he wrote.