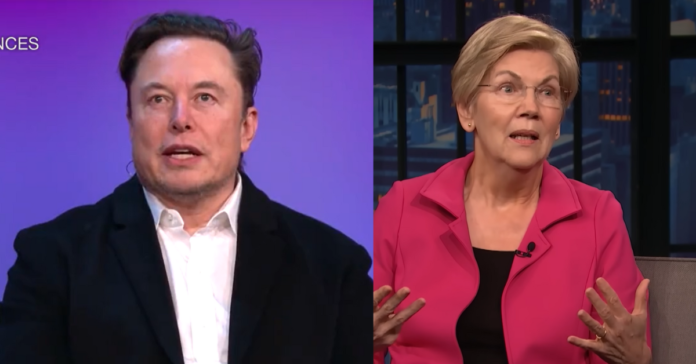 Sen. Elizabeth Warren, D-Mass., who claimed she was Native American so she could game the system to rise to the top of her profession, is now targeting Elon Musk, a man who started with nothing and revolutionized three industries through talent and hard work. It would be hilarious if it was not so dangerous.

Warren wrote to the chair of Tesla’s board, Robyn Denholm, saying CEO Elon Musk possibly violated his legal duties to Tesla over his actions at Twitter and the board could be in trouble for failing to protect the company from him.

She wrote: “I am writing regarding concerns that Tesla’s Board of Directors has failed to meet this legal duty with regard to the actions of Tesla’s Chief Executive Officer, Elon Musk, in the aftermath of his purchase of Twitter.

″Every Board of Directors of a company with multiple shareholders – especially publicly traded companies – is responsible for ensuring that a controlling shareholder (especially one who is also a Chief Executive Officer, or CEO) does not treat the company as a private plaything.

“The first weeks of Mr. Musk’s Twitter ownership have raised questions about possible violations of securities or other laws, including whether Mr. Musk is funneling Tesla resources into Twitter.

“This use of Tesla employees raises obvious questions about whether Mr. Musk is appropriating resources from a publicly traded firm, Tesla, to benefit his own private company, Twitter.

“Mr. Musk could decide that he is personally better served is Tesla overpays Twitter for advertising or pays up front to give Twitter access to much needed cash.

“Despite these threats and despite the independent legal obligations of the Tesla Board, it appears that the Board has taken no action to protect the company, and Tesla’s stock price has plunged.”

According to CNBC Warren wants answers by Jan 3:

She accused Tesla’s board of failing to take action to protect the company as its stock fell sharply after Musk’s purchase of Twitter while other automakers have outperformed Tesla.

Though she acknowledged not all the losses could be attributed to the Twitter purchase, “there appears to be a direct link,” she said.

Warren asked Denholm to respond by Jan. 3 about the oversight the board will impose on Musk to ensure he meets his fiduciary duties at Tesla, how it’s protecting from conflicts of interest, what sort of formal agreements are in place between the two companies and more.

Enter Elon Musk who said: “The United States has definitely been harmed by having her as a senator lol.”

Someone as untalented as Warren should not interfere with a guy who revolutionized three industries. That is the only way this country could ever lose its competitive advantage.