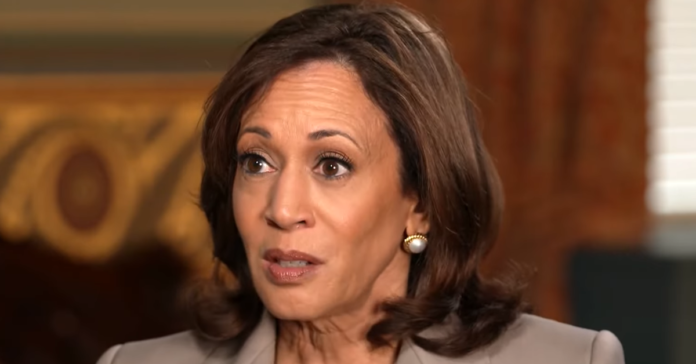 Vice President Kamala Harris surfaced to give an interview with NPR where the border czar took no responsibility for the mess at the southern border and instead tried to blame the Republicans. It won’t work.

Kamala said: “And sadly, what we have seen in particular, I am sad to say, from Republicans in Congress is an unwillingness to engage in any meaningful reform that could actually fix a lot of what we are witnessing.

“I think that there is so much that needs to happen to address the issue. Reform of our immigration system can only happen through Congress in terms of the passage of an immigration bill that allows for a legal pathway to citizenship and a legal presence in the country,” she said.

White House press secretary Karine Jean Pierre was asked what Kamala was doing to solve the border crisis other than blame the GOP and she came up empty:

“I don’t have anything to lay out specifically on what that work looks like.”

“We have a secure border in that that is a priority for any nation, including ours and our administration.

“But there are still a lot of problems that we are trying to fix given the deterioration that happened over the last four years.

“We also have to put into place a law and a plan for a pathway for citizenship for the millions of people who are here and are prepared to do what is legally required to gain citizenship.

“We don’t have that in place because people are playing politics in a state like this and in Congress.

“By the way, you want to talk about bipartisanship on an issue that at one time was a bipartisan issue both in terms of Republican senators and even presidents,” she said.

“I don’t have anything to lay out specifically on what that work looks like” pic.twitter.com/4e3vcBYonV

Kamala Harris Visits Brittney Griner To Lock Her Up On Marijuana Charges https://t.co/qZ9INFnOHM

Trump Fires Back At Liz Cheney, Knocks Her Off High Horse: “Liz Cheney lost by a record 40 points”