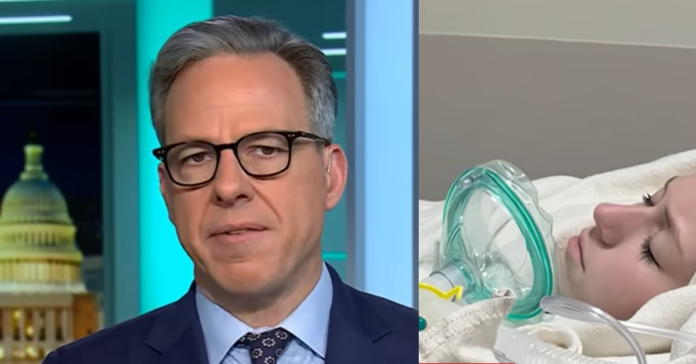 Jake Tapper’s 15-year-old daughter Alice Tapper “almost died” from appendicitis after doctors misdiagnosed her. Doctors at the hospital ruled out appendicitis and refused to do tests to confirm it despite Tapper, his wife, and his daughter begging them to do an ultrasound and call in a specialist.

She wrote: “I almost died around Thanksgiving last year, and it was entirely preventable. It started one weekend in November 2021 with stomach cramping, a low fever, chills and vomiting. Soon it became clear I needed to go to the emergency room. By the time I got there, I had low blood pressure, an elevated heart rate, intense abdominal pain and a high white blood cell count.

“I was given IV fluids to combat my dehydration, but I didn’t get better. The doctor and nurses didn’t know what was wrong and stood around me confused, as if they were waiting for me to tell them what to do. “The sharp cramping pains and the throbbing feeling in my stomach got worse, so they transferred me to another hospital.

“With guidance from my pediatrician, my parents told the doctors to check for appendicitis. But since I was tender all over my abdomen — not just on my right side — the doctors ruled it out. My parents kept pressing, so a doctor told me to stand up and jump. I could barely get an inch off the ground. The doctors concluded that what I had must be a viral infection and would eventually just go away.

“I got sicker and my skin started turning a pale green. As Monday turned into Tuesday, I was only given Tylenol for my pain. My mom asked the doctors why I couldn’t get a sonogram to see what was happening inside my abdomen; they said it wasn’t needed.

“My dad asked why I couldn’t get antibiotics; the doctors said for a viral infection they could do more harm than good.

“My parents kept pushing for a gastroenterologist who might have more insight about my condition to evaluate me, but one never came.

On Tuesday night, my dad went home to be with my brother, but it wasn’t long before my mom called him in tears.

“I was in agony and was only being treated with a heating pad. My dad got the phone number for the hospital administrator and begged for a gastroenterologist, for imaging — for anything.

‘The phone call worked, and at the hospital administrator’s orders, I was finally taken to get an abdominal X-ray. The imaging showed this was no viral infection.

“In the middle of the night, I was rushed to get an ultrasound that revealed I had a perforated appendix that was leaking a poisonous stream of bacteria throughout my internal organs. When I learned my diagnosis, I was almost relieved. At least the doctors now had a plan.

“Finally, the surgical team took over. The next couple of hours were a blur. A CT scan was followed by emergency surgery; two laparoscopic drains were inserted in my body to get rid of the toxic leakage. I had sepsis and we would later learn I was going into hypovolemic shock — which can cause organs to stop working. That night was the scariest night of my life.

The X-ray machine was down the hall, the CT machine just a floor below, the sonogram machine just steps away and the antibiotics I needed were just one phone call away. But doctors didn’t utilize these tools to quickly diagnose and treat me and, as a result, I almost died.

“It breaks my heart to think about the boys and girls who don’t have parents who can get the phone number of the hospital administrator — who can’t make their voices break through.

“I still can’t believe this happened to me — and I don’t want it to happen to anyone else,” she wrote.