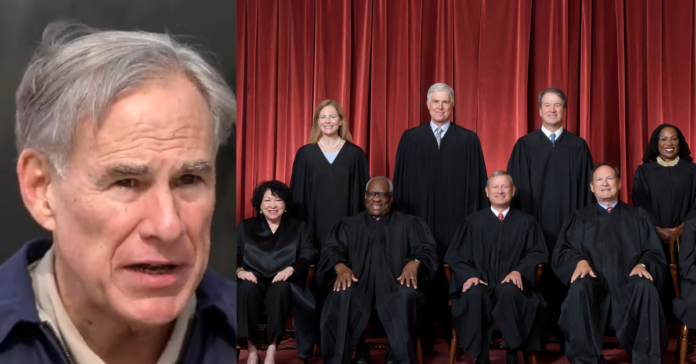 Republican Texas Governor Greg Abbott warned the Supreme Court to step in and stop President Joe Biden from ending former President Donald Trump’s Title 42 border policy or we will have total chaos at our southern border.

Title 42 is a Trump administration policy that allows border agents to turn asylum-seekers away over public health concerns. Abbott said: “If the courts do not intervene and put a halt to the removal of Title 42, it’s gonna be total chaos.

“Whether it’s COVID or some other issue, when you have people coming across the globe without knowing – at all – what their health status is, that almost by definition, is a public health risk.

“There’s every reason to keep that in place.”

He defended his policy of bussing migrants north saying:

“The very reason behind this is because communities like Del Rio and Eagle Pass and others, they were having thousands of people dumped off into their communities and they don’t have the capability of dealing with that vast number of migrants,” he said.

“I removed them to locations that self-identified as sanctuary cities that have the capability and the desire to help out these migrants.

“I don’t think I’ve ever heard President Biden say, ‘We have an open border, come on over.

“The people I have heard say it are you, are former President Trump, are Ron DeSantis. That message reverberates in Mexico and beyond.

“So they do get the message that it is an open border and smugglers use all those kinds of statements.”

“It is known by the cartels, they have sophisticated information.

“Whether or not the Biden administration is going to enforce the immigration laws or not is known across the world but most importantly, known among the cartels.”

Abbott is moving state resources to the border to try to deal with the coming chaos. He said:

“Now, more than ever, it is imperative that our law enforcement officers and Texas National Guard soldiers adopt innovative solutions needed to counteract President Biden’s reckless decision to end Title 42 expulsions next week.

“While the federal government abandons its constitutional duty to defend America and secure the border, the State of Texas continues taking unprecedented action to deescalate and decrease the influx of dangerous criminals, illegal weapons, and deadly drugs like fentanyl into our country.

“Stepping up to overcome extraordinary challenges is embedded in the spirit of Texas, and I have no doubt that the exceptional men and women serving Texans—and Americans—through Operation Lone Star will employ the best possible strategies to navigate the uncharted waters of President Biden’s escalating border crisis.”

EXCLUSIVE: With the expected end of Title 42 just days away, @MarthaRaddatz sits down with Texas Gov. Greg Abbott on the southern border.

“If the courts do not intervene and put a halt to the removal of Title 42, it’s gonna be total chaos,” Abbott says. https://t.co/6hEynkzYMP pic.twitter.com/jpugtWlvBJ