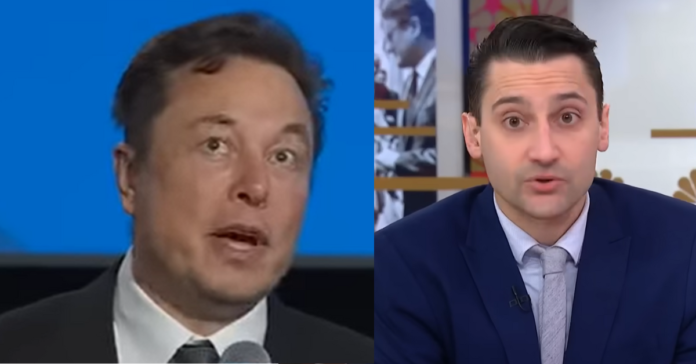 Ben Collins is an NBC ‘disinformation’ reporter. He describes his area of expertise as “Senior reporter, dystopia beat, @NBCNews.” The title is meaningless on purpose because Collins is a new breed of journalist. One who doesn’t report on the misdeeds of the powerful but censors and scolds on their behalf.

Our founding fathers would be disgusted. Thankfully, powerful people saw the danger and stepped in to try to right the ship. Billionaire Trump donor John Malone bought CNN and is cleaning house. Elon Musk bought Twitter and is doing the same.

And then Musk started releasing the internal Twitter files that proved beyond a doubt the inmates were running the asylum. And that people like Collins were frauds who peddled fake news.

Collins was not happy. And then Musk did the unthinkable. He started banning them.

The left did not take this loss of power well.

News from @maxwelltani : NBC News has suspended @oneunderscore__ from appearing on air, over Musk criticism it thought crossed the line https://t.co/9zMkQgbxM1

One of the loudest voices whining about it was Ben Collins. And in a plot twist that spells doom for Collins and his ilk, and shows you the tide has turned permanently, NBC just suspended him over his bias against Musk.

“NBC News had already benched one of the journalists who has reported on Twitter and been harshly critical of Musk.

“According to two sources, the network told Collins earlier this month that his criticism of Musk, which included comments about how the billionaire was purposefully trying to destroy Twitter, was not editorially appropriate.

“Collins continued to tweet his reporting about Twitter last night about the social network’s ban of journalists.

“The New York Times released a statement Thursday evening calling the move “questionable and unfortunate,” and called for the tech company to offer an explanation about the suspension. Privately on Friday, the paper’s leadership asked staff not to fight with Musk on Twitter.

Collins, who advocates banning disfavored public figures from major tech platforms in much of his writing and on-air commentary, has been barred from talking about Musk on the airwaves of NBC and MSNBC, Semafor reported.

The ban comes after Collins spent weeks attacking Musk over his decision to restore the accounts of a number of right-wing influencers and provocateurs, such as Roger Stone and Laura Loomer.

The dictate from NBC executives reportedly came down after Collins ridiculed Musk for failing to realize that Twitter’s deputy general counsel, James Baker, had previously served as general counsel for the FBI.

NBC News has suspended Ben Collins from MSNBC and NBC for his unprofessional attacks on Elon Musk.

You love to see it.