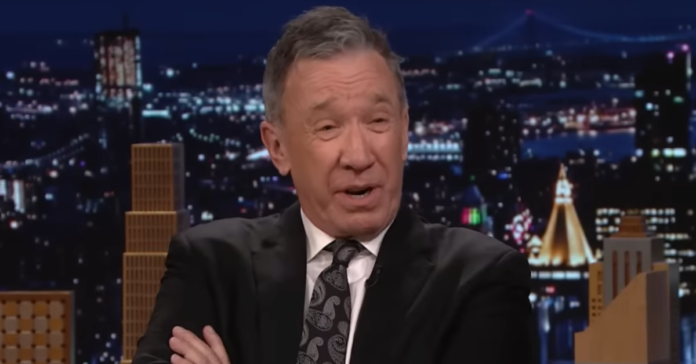 Tim Allen overruled liberals in an interview with Fox News saying his new Christmas show honors the Christian tradition rather than run from it.

“It’s a Christian holiday. So, we don’t belabor it, but we don’t ignore it,” he said.

Tim said about his Disney+ television series’ “The Santa Clauses”: “You know, you get around that suit, and I haven’t changed.

“It’s become that stupid thing, and it ain’t me. I’m nowhere near as nice as that guy.

“It’s just amazing how I become that guy, walk on set and people react to it, and I honor it.

“I don’t make any jokes anymore as I watch my performance, and I literally think I’m better as Santa Claus than I am as anything else because I think for any actor to tease or put on a costume, it’s easy to become that thing.

“We honor the Christian tradition without heralding it.

“To get that first episode, get the fourth episode and the sixth episode in my head.

“I see the beginning, middle and end as though it’s a six-hour movie. I said, ‘This thing is very, very good,’ and this is early on, and we continue down this path.

“This is a new format for me, and then I can get my head around it creatively. “It’s not a television show. It’s not a movie.

“It’s what we’ve been forced, challenged to do now is a hybrid. It’s a long movie or a very produced, very creatively elevated television program.”

“I wasn’t able to be a fan because I’m frickin’ dressed as Santa Claus. So, I could no matter how much I grinned that I’m working with Peyton Manning to look like Santa Claus, to get a smile on his face.

“And so the fan was underneath, you know, 70 pounds of makeup. It was unbelievably challenging, and it was the greatest scene.

“Once I started doing coming to Disney and doing ‘Home Improvement’ or ‘Last Man Standing’ or getting on sets, I love every second of it.

“I don’t ever feel like I’m working so that I don’t know how to not do this.

“I have two friends that love their retirement – they play tennis.

“They get up and have a leisurely breakfast with the wife.

“They love their retirement. It takes me almost my entire vacation to finally have two days of relaxation because I love what I do,” he said.

“We honor the Christian tradition without heralding it.”https://t.co/s2Fp5Nbu0R

CNN Threatens Elon Musk: “We will reevaluate our relationship based on that response”