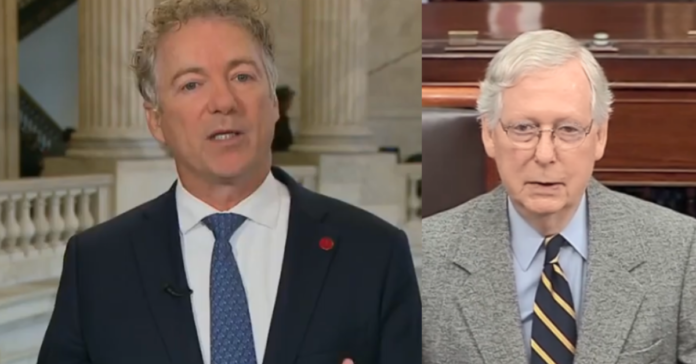 Senator Rand Paul (R-KY) ripped Mitch McConnell and other Republican Senators for caving to Joe Biden saying the GOP has been “emasculated.”

Paul said: “This brings upon us the lie that Republicans really are fiscally conservative.

“The Democrats aren’t. They will not pretend to be fiscally conservative. “Not one of them up here gives a darn about the debt.

“The Republicans all profess to be, but when you make them vote on the PAYGO resolution, pay as you go, that we can’t have new spending without offsetting it, they always vote to exempt it.

“We’ll get it two hours before they want to pass it.

“No one will read it.

“If 41, one of us said no and held our ground until there was a compromise, we could force Democrats to reduce spending.

“We have completely and totally abdicated the power of the purse.

“They have no power, and they are unwilling to gain that power back.”

I can’t do much about the feckless Senate leadership, but as Chair of the RNC I pledge to end the reckless spending there: ‘Republicans Are Emasculated’: Rand Paul Furious Over Bipartisan Spending Deal, Says GOP Isn’t Fiscally Conservative https://t.co/tubk9Mb8W0 via @mediaite

“Mark my words — December 16th or 18th we’re going to get a 3,000 page bill that’ll have been given to us an hour or two before… No one will read it. It’ll add over a trillion dollars to the debt next year. The system is not working.”pic.twitter.com/bOMLKfpDwc

Donald Trump Goes Scorched Earth: “I will fire every federal bureaucrat who has engaged in domestic censorship”