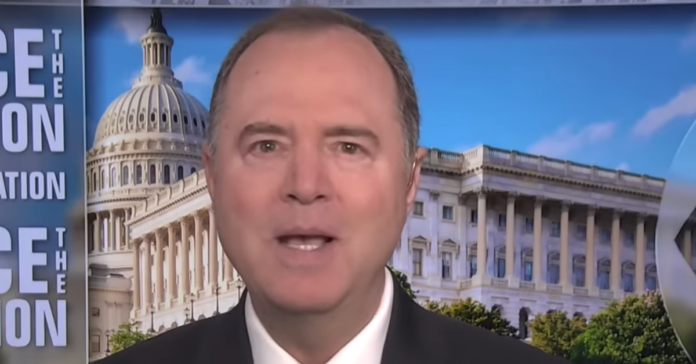 Adam Schiff made an un-American move in his desperate bid to censor Trump and conservatives voices. And he may have violated the US Constitution in the process because government officials are not allowed to censor speech.

But in a letter to Facebook Schiff told them not to let Trump back on the platform and to censor other high profile individual’s (conservatives).

Facebook will review Trump’s case after the new year and he may be let back on. Schiff is saying Trump is an election denier and thus needs to be muzzled.

And Schiff knows this because the Dems secretly funded many of these ‘election deniers’ he now says are reason to censor speech.

So the Dems fund the ‘election deniers’ because it is the fastest and easiest path to power and then try to censor those same people? Rules for thee…

The same people they threw money at in November are now threats and must be silenced?

That is what the letter is really about—censoring conservatives to control the narrative. And believe me, in the 2024 election the Democrats will back these candidates again no matter what they are telling Facebook now.

They lost Twitter so they are trying to scare Facebook. It is cynical, ugly, un-American and last i checked illegal for government officials to censor speech.

Following the 2022 midterm elections, we write to urge Meta to maintain its commitment to keeping dangerous and unfounded election denial content off its platform. To that end, we also urge Meta and its leadership to continue the suspension of former president Donald Trump’s Facebook account beyond January, and to carefully monitor and counter the spread of harmful election misinformation, including the Big Lie about the 2020 presidential election, on Facebook.

After each election cycle, social media platforms like Meta often alter or rollback certain misinformation policies, because they are temporary and specific to the election season. Doing so in this current environment, in which election disinformation continuously erodes trust in the integrity of the voting process, would be a tragic mistake. Meta must commit to strong election misinformation policies year-round, as we are still witnessing falsehoods about voting and the prior elections spreading on your platform.

Meta has previously taken concrete actions to fight falsehoods and misinformation regarding elections, such as Facebook’s adding labels on election-related posts promoting reliable information in 2020 and 2021, which was an important step in countering the proliferation of election misinformation on the platform. We also supported Meta’s decision to suspend the Facebook account of former president Trump for, “maintaining an unfounded narrative of electoral fraud and persistent calls to action” therefore creating “an environment where a serious risk of violence was possible” according to the Facebook Oversight Board. That risk persists, and certainly has not diminished since the former president’s removal.

For Meta to credibly maintain a legitimate election integrity policy, it is essential that your company maintain its platform ban on former president Trump. We understand that the initial suspension of his account expires in January, and that Meta will then make a decision regarding the future of his account. When initially suspending the account, Facebook’s statement said, “If we determine that there is still a serious risk to public safety, we will extend the restriction for a set period of time and continue to reevaluate until that risk has receded.” Two years later, we can see unequivocally that Trump is still spreading the Big Lie and thus undermining our democracy. Indeed, he has expressed support for pardoning people involved in the January 6th attack on police, should he ever get the chance.

Trump has continued to post harmful election content on Truth Social that would likely violate Facebook’s policies, and we have every reason to believe he would bring similar conspiratorial rhetoric back to Facebook, if given the chance. On Election Day this year, Trump perpetrated false election narratives, including unfounded claims that, “The Absentee Ballot situation in Detroit is REALLY BAD…Protest, Protest, Protest!” Similarly, he posted that, “Maricopa County in Arizona looks like a complete Voter Integrity DISASTER. Likewise Detroit (of course!), Pennsylvania, and other places. Not being covered by Fake News Media!” A later post claimed, “Arizona even said ‘by the end of the week!’ – They want more time to cheat! Kari Lake MUST win!”

Based on Meta’s own statement on standards for allowing Trump back on the platform, his account should continue to be restricted. According to a Media Matters’ report, Trump has “amplified at least 61 QAnon accounts more than 130 times” on Truth Social. These posts would explicitly violate Facebook’s policy banning QAnon, which took effect in 2020. Trump has also incited violence on Truth Social in many instances. For example, he claimed in one post that Senate Minority Leader Mitch McConnell “has a DEATH WISH.” His rhetoric can only serve as a motivation to incite violence, and it is Meta’s responsibility to keep such rhetoric off its platforms.

Furthermore, this rhetoric extends beyond just the former president to other high-profile individuals. We saw in the 2022 midterm elections that candidates who posted the same falsehoods about disproven electoral fraud in the 2020 election and expected fraud in 2022 elections were allowed to spread the Big Lie on Facebook. Unlike other major social media platforms, Meta’s policies do not prohibit posts that make unsubstantiated claims about voter fraud. A review by the Washington Post found 18 candidates denying the 2020 election results and 17 candidates claiming the 2022 elections will be rigged or corrupt posted on Facebook, with none of these posts on Facebook being labeled or challenged. This is highly troubling, and an area where Meta must improve its oversight and enforcement.

Not only have election denial claims remained untouched on Facebook, but recent reports found that election denial posts gained more engagement on the platform. A recent review by Bloomberg News that analyzed the Facebook posts of every Republican running for Senate, Congress, governor, attorney general or secretary of state this year, found “Candidates who have pushed the falsehood that the 2020 election was stolen routinely saw their posts collecting more engagement overall compared to the performance of each candidate’s average post.” With the ability and motivation to spread election lies, these posts are proliferating on Facebook and reaching a large audience. According to CrowdTangle, the media analysis tool owned by Meta, Election denial posts reached as many as 120.4 million people in the past year.

Given the continued election denial rhetoric, we urge Meta to recommit to focusing on election integrity year-round, while keeping Congress fully informed about its efforts. We believe that part of the commitment to election integrity should be ensuring that those who maintain the unfounded, dangerous narrative of the 2020 election are not allowed or encouraged to spread the lie to foster engagement on Facebook.

As part of our ongoing oversight efforts, we request answers to the following questions, as well as a briefing to discuss other areas of oversight:

After seeing election misinformation spread on Facebook regarding the 2022 elections this year, what changes will Meta make to its election integrity policies to ensure that misinformation about elections does not continue to spread?

With the rise of candidates spreading election denial — both past and present — will Meta commit to monitoring and consider suspending dangerous, unfounded posts, regardless of who posts the content?

Will Meta commit to keeping their election infrastructure in place year-round? What changes will be made to increase its capacity to monitor and provide truthful context to its users?

Have the recent layoffs at Meta decreased the number of employees working on the misinformation, election integrity or foreign malign influence teams?

What criteria will Meta consider when reviewing the ongoing suspension of Donald Trump’s accounts? Will Meta request any assurances from the candidate?

Will Meta analyze the posts of Trump on Truth Social and other statements he has made when making a decision on his suspended account?

Elon Musk Threatens Man Who Stalked His Small Child: “Legal action is being taken against Sweeney & organizations who supported harm to my family”