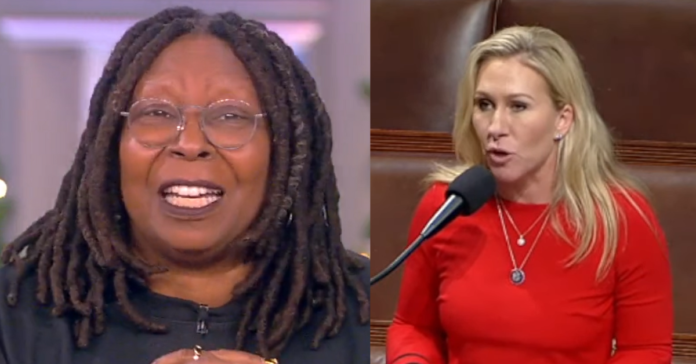 Whoopi Goldberg told the US Constitution to pound sand and asked her co-hosts on The View why Rep. Marjorie Taylor Greene (R-GA) is not behind bars because of her recent comments about the Jan. 6 Capitol riot.

Goldberg said: “If we had done this, engaged in this in any way, we would be facing charges. This woman gets to come and talk about taking over the country, and she’s not behind bars. How does that work?

“When you use sarcasm, you’re saying the opposite of what you mean. This is an example of sarcasm, ‘Boy, that Marjorie Taylor Greene is brilliant. She should be in Mensa.’ That’s sarcasm. What she said was not sarcasm.”

“Go back to college and learn a little more. And then we’ll talk.

“I was reading this weekend about other countries.

“In Peru, the President of Peru, this is so interesting to me.

“He tried to dissolve the government and seize power.

“They arrested him that day — that day.

“And in Germany this week, there was a group of people who tried to overthrow the government in Germany, they’ve all been arrested.

“And he was one of those people trying to overthrow the government.

“In those countries, which are democracies, Trump would’ve been in jail three years ago,” Behar said.

Greene said: “Then Jan. 6 happened. And next thing you know, I organized the whole thing, along with Steve Bannon here. And I will tell you something, if Steve Bannon and I had organized that, we would have won. Not to mention, it would’ve been armed.

“See that’s the whole joke, isn’t it? They say that whole thing was planned and I’m like, are you kidding me? A bunch of conservatives, second amendment supporters, went in the Capitol without guns, and they think that we organized that?”

REP. GREENE SAYS SHE “WOULD HAVE WON” JAN. 6 ATTACK: After Congresswoman Marjorie Taylor Greene claims the outcome of the Capitol insurrection would have been different if she was in charge and later called her comments sarcasm, #TheView panel weighs in. https://t.co/cVclFZyKV0 pic.twitter.com/nhwVGPK1Es

Elon Musk Puts Justin Trudeau On Notice: “Sounds like an attempt to muzzle the voice of the people of Canada”