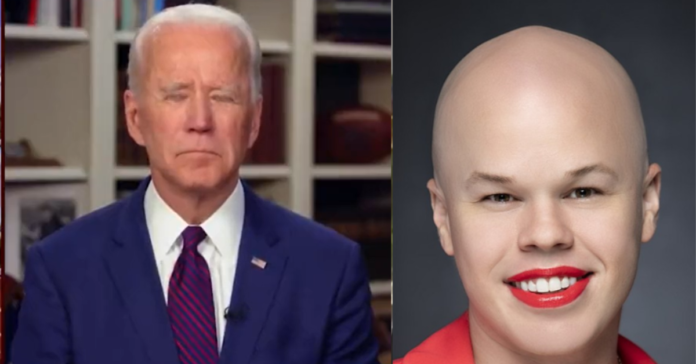 The Department of Energy finally fired Sam Brinton after he was accused of stealing luggage in Las Vegas and Minneapolis. He was arrested for the Minneapolis crime and has a felony arrest warrant out for the Vegas crime.

“Brinton demonstrated several signs of abnormal behavior while taking the victim’s luggage which are cues suspects typically give off when committing luggage theft.

“Specifically, Brinton pulled the victim’s luggage from the carousel and examined the tag.

“Then placing it back on the carousel, looking in all directions for anyone who might be watching, or might approach.

“Pulling it back off the carousel and demonstrating the same behavior by looking around before walking away with it quickly.

“Brinton only having checked one piece of luggage, which Brinton had already claimed from the carousel, had no reason to be examining and taking any other pieces of luggage.”

Tom Cotton said: “Re. Sam Brinton, let’s call it what it is: a person clearly unfit for a high-level national security role was hired because the Admin prioritizes wokeness over competence.”

“We write to respectfully demand the resignation of the Department of Energy’s Deputy Assistant Secretary of Spent Fuel and Waste Disposition, Sam Brinton, who was recently put on leave following felony theft charges,” the letter said.

“Despite not checking a bag before flying out of Washington, D.C., surveillance footage reveals Brinton taking and leaving with luggage from the baggage carousel at the Minneapolis-St. Paul Airport on September 16th.

“After initially lying to the police, Brinton later admitted to taking a suitcase valued at $2,325 and hiding the owner’s belongings in a hotel room.

“Alarmingly, Brinton has been observed using the stolen suitcase on multiple trips to Washington, D.C.3 , and was ultimately charged with felony theft, which carries a penalty of up to five years imprisonment, a $10,000 fine, or both.

“As you are aware, your Department issued notice that Sam Brinton was placed on leave without providing crucial context clarifying that Brinton’s recent employment status was the result of a felony charge.

“As an appointed official, Sam Brinton represents both your Department and the United States. It is simply not possible for an individual to represent American values and simultaneously violate the felony laws of the land.

“Brinton’s actions, along with your Department’s lack of transparency when dealing with this matter, reflect poorly on the Department of Energy, and they raise concern as to the Biden Administration’s priorities when appointing high-ranking officials.

“It is imperative that we do not allow a person charged with a felony to influence America’s policies,” the lawmakers said.

“Furthermore, our nation is in the midst of an energy crisis – a crisis that was unquestionably created by the Biden Administration’s reckless, radical, and failed policies. Your Department should be dedicated to a pro-American energy agenda, focusing on restoring energy independence and lowering energy prices across the nation.

“However, to many Americans, it appears that you are more interested in playing politics and protecting an employee who admitted to felony theft to police than providing real solutions for hard-working Americans,” they said.

“Therefore, we demand the resignation of Sam Brinton, and we implore you to set aside petty politics and appoint only the most qualified and dedicated individuals to influence America’s energy sector,” they wrote.

Re. Sam Brinton, let’s call it what it is: a person clearly unfit for a high-level national security role was hired because the Admin prioritizes wokeness over competence.

Tara Reade Calls For Joe Biden To Resign Or Be Impeached Over Assault Allegations: "I hope there are investigations and real consequences for these individuals involved and Biden resigns or is impeached”