GOP Rep Turns Tables On Dem Activist, Ends Her Reign of Censorship: “Do you believe your rhetoric is a threat to democracy when you’re calling to accost a branch of government, the Supreme Court?” 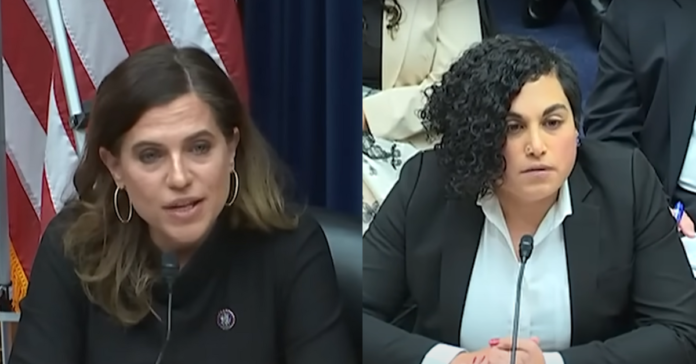 Rep. Nancy Mace exposed liberal activist Alejandra Caraballo during a hearing on Tuesday of the House Committee on Oversight and Reform. Caraballo teaches at Harvard’s Cyberlaw Clinic and is one of the loudest voices on the left to call for censoring speech.

Conservative speech it turns out because when she was confronted with speech she claims is worth censoring from the left, she changed her tune. Publicly and embarrassingly in front of the nation. Look, these people are not serious people. They are making it up as they go. In many cases because they have to justify their own jobs and careers. We see that in the Twitter files. As Elon Musk said, we have been letting the inmates run the asylum and that must change.

“Do you believe that rhetoric targeting officials with violence for carrying out their constitutional duties is a threat to democracy,” Mace asked the five liberal witnesses including Caraballo. They all said yes. But they were not prepared for what Mace did next because, of course, they were talking about censoring conservatives not liberals.

Mace threw a tweet made by Caraballo on June 25, 2022, which encouraged violence against Supreme Court Justice Brett Kavanaugh, back in their faces. Mace read her tweet for the Congressional record:

“The 6 justices who overturned Roe should never know peace again. It is our civic duty to accost them every time they are in public. They are pariahs. Since women don’t have their rights, these justices should never have a peaceful moment in public again.”

Mace looked right at the obvious fraud Carabella and said:

The hysterical male-to-female trans activist Alejandra Caraballo accidentally admits to being a stochastic terrorist and threat to democracy.

“I know something about being accosted.

“The night of January 5, I was physically accosted on the streets of DC in Navy Yard by a constituent of mine.

“I fervently blamed rhetoric, rhetoric on social media, rhetoric at public events for being physically accosted.

“I carry a gun everywhere I go when I am in my district and I’m at home because I know personally that rhetoric has consequences.

Mace read another tweet from Caraballo on November 19, 2022, which said: “It’s so clear that Justice Alito is corrupt and SCOTUS as an institution is compromised. This is not a legitimate court issuing decisions.

“It’s an organ of the far right that solely follows outcome determinative logic rather than any reasoned jurisprudence.”

“So my last question today of Ms. Caraballo, do you stand by these comments, this kind of rhetoric on social media? And do you believe it’s a threat to democracy?”

Caraballo stammered out a nonanswer, “the opportunity to clarify and provide context to my tweets.”

Mace cut her off:

“Do you believe your rhetoric is a threat to democracy when you’re calling to accost a branch of government, the Supreme Court?”

“I don’t believe that’s a correct characterization of my statements,” Caraballo said.

“Did you not tweet that, that you thought that the Supreme Court justices should be accosted?” Mace asked.

“What I’m saying is that is not an accurate characterization of my statements,” Caraballo said.

Gavin Newsom Warns Kamala Harris The Immigration System Is 'About To Break': “What we've got right now is not working, and it's about to break in a post-42 world”

Tara Reade Calls For Joe Biden To Resign Or Be Impeached Over Assault Allegations: "I hope there are investigations and real consequences for these individuals involved and Biden resigns or is impeached”