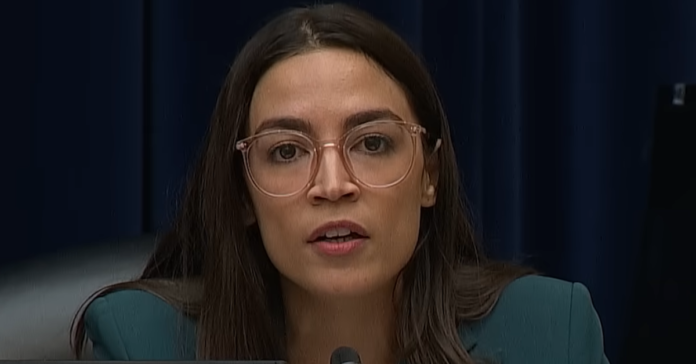 A new documentary about New York Rep Alexandria Ocasio-Cortez bombed at the box office and is a certifiable flop. Director Rachel Lears’ made a 2019 documentary “Knock Down the House” about AOC and other young lawmakers.

Her follow-up project, “To the End,” teams her up with Rep. Ocasio-Cortez again this time to track the New Yorker’s time in House trying to pass legislation especially the Green New Deal.

Critics gushed the movie will “ignite more Americans” to take action. But not if no one sees it. According to Exhibitor Relations, the movie is a dud:

“Roadside Attractions’ documentary on climate change, TO THE END, “starring” AOC, was voted out of the box office–just $9,667 in 120 theaters, $81 per.

This it the end, my friend.

Roadside Attractions’ documentary on climate change, TO THE END, “starring” AOC, was voted out of the box office–just $9,667 in 120 theaters, $81 per.

The movie came in 33rd place over the weekend at the box office. Ouch

According to film critic Nick Allen:

“Director Rachel Lears last went to Sundance with “Knock Down the House,” about four candidates who ran historic elections, including that of Rep. Alexandria Ocasio-Cortez.

“Her latest film “To the End” is like a sequel, giving us some insight into the new representative’s time in office: the video calls that she rolls her eyes at, the realizations she’s had about Washington, D.C., and more.

“But the focus here is more about the Green New Deal, a vital change to infrastructure in America that could help fight against global warming and save American economy as the clock ticks.

“To the End” shows the momentum of Ocasio-Cortez’s youthful spirit, this time spread out in groups that are creating awareness, marching across the country, and not usually given the amount of on-camera love that Lears provides here,” he said.

Nancy Pelosi Caught On Film Asking If She’s A B*tch "Am I a b*tch?" During Tense Call With Mike Pence