Nancy Pelosi Caught On Film Asking If She’s A B*tch “Am I a b*tch?” During Tense Call With Mike Pence 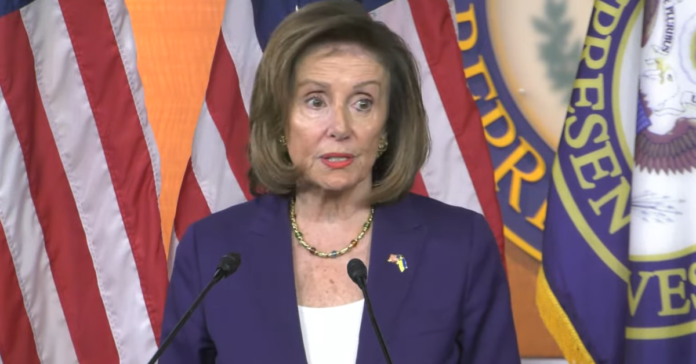 Nancy Pelosi’s daughter, Alexandra, is a documentary filmmaker for HBO. Her 14th documentary, ‘Pelosi in the House,’ is about her mother and will be released December 13.

In one scene, Nancy was filmed during a tense phone call with former Vice President Mike Pence during the height of the pandemic in 2020. According to the documentary, Pelosi made some smartass comments to Pence before turning to her daughter and asking “Am I a b*tch?”

If you have to ask…Reporters for Politico got a sneak peek at the film and described the scene: NANCY PELOSI listened from home as Vice President MIKE PENCE spoke on a coronavirus teleconference.

The speaker did the laundry and tidied the bed as Pence spoke. Her husband, PAUL PELOSI, made food in the kitchen.

“What is the point of this call?” her daughter, filmmaker ALEXANDRAPELOSI, asked, following her mom around with a video camera.

“They’re checking a box,” Pelosi responded as she continued her chores.

Pelosi then unmuted herself, sarcastically declared “this has been a useful exchange” and went on to grill Pence on how the administration was tracking how the virus was spreading before signing off with a cheery “Happy Easter!”

She put herself back on mute and turned to her daughter: “Am I a bitch?” she asked.

“I don’t even know if she’s gonna like the film, to be honest.

“Nobody in my family’s seen it, and it’ll be interesting to see what they think of it because I’m the youngest of five, and as the youngest, we do our own thing.

“And this is my own thing.

“I don’t know how my whole family is gonna look at it and say, well that’s just your view.

“It’s kind of like a car accident: it depends where you’re standing and what you saw.

“I saw things this way.

“My sisters would probably give you a completely different interpretation of what they saw.

“I’m sort of the dark cloud of the family, so I have a different take on things than, you know, my super toxically-positive family members,” she said.

“She eats nails for breakfast.” pic.twitter.com/cDXkqHbhdh

REVIEW: If you admire Nancy Pelosi, you want to see the new HBO documentary, “Pelosi in the House.” But even if you’re simply interested in politics or in modern American history, this is an essential documentary. https://t.co/MyXzzxzgAt