Ben Carson Fires Back After School Board Removes His Name From High School: “Cancel culture is going to destroy us as a nation if we don’t get a grip on it” 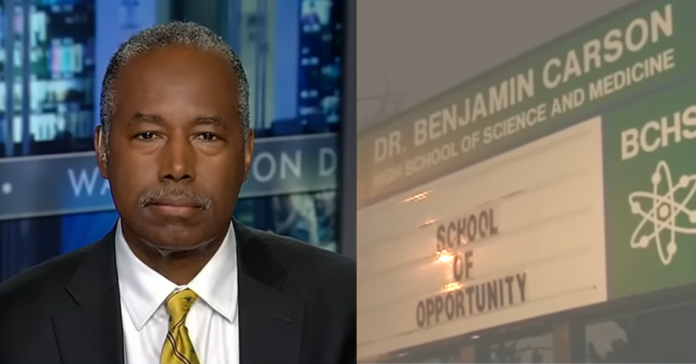 Dr. Ben Carson’s name will be removed from a Detroit public high school after a school board vote. The Benjamin Carson High School of Science and Medicine will get a new name despite an administrative recommendation not to make the change and students voting to keep the name.

Carson was saddened by the news but not surprised. He said: “It’s very sad that we’ve reached the point where political ideology trumps the whole purpose of an educational institution. And we’re seeing this wokeness spreading throughout our community to the destruction of our community.

“How does it do any good for us to demonize people with whom we disagree and to teach that to our children at a time when the math scores are down, the reading scores are down; academic performance is down?

“Cancel culture is alive and well. It’s infiltrating. Political correctness, wokeness, cancel culture, this is going to destroy us as a nation if we don’t get a grip on it.

His former staff from the Department of Housing and Urban Development ripped the move in a letter. 55 people signed it. They wrote:

“We, former staff for Dr. Carson at the U.S. Department of Housing and Urban Development, write to set the record straight and celebrate the incredible accomplishments of the good doctor, with the hope that more focus is shined on students and less on perceived political slights.

“Dr. Ben Carson was born into poverty in Detroit and raised by a single mother. He grew up attending Detroit public school, and his mother worked multiple jobs to provide for him and his brother, Curtis.

“But even for all his accomplishments, Dr. Carson’s own words sum it up better than we ever could: “When we have done our best, we also have to learn that we still need to rely on God. Our best — no matter how good — is incomplete if we leave God out of the picture.”

“The truth is, Dr. Carson should have dozens of schools named after him. We firmly believe removing the name of a man like this leaves us all the worse off for it, especially the students this political stunt purports to set an example for.

“We hope each student aspires to be the type of leader Dr. Carson is: a compassionate and humble man that cares deeply about the future of our children.

“Dr. Carson is the epitome of the American dream. Only in our country could a poor boy from the inner city grow up to be a world-renowned neurosurgeon, presidential candidate, and Cabinet secretary. He personifies the very promise of America.

“Through hard work, opportunity and faith in something above self, just like Dr. Carson we can achieve anything we set our minds to,” the letter said.

These are the additional 55 signatories to the letter:

Joe Manchin Puts Chuck Schumer On Notice: “I’m not a Washington Democrat, people are registering more for independent than any other party affiliation, they are sick and tired of it”