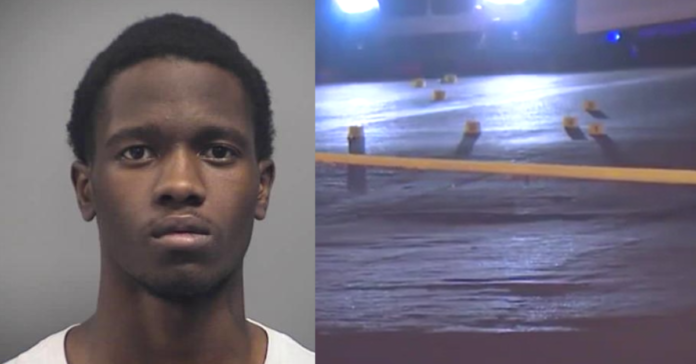 A Las Vegas woman had enough of the crime in her city and shot and killed a would-be carjacker using the thug’s own gun. The woman and a female friend had just parked their car to go to a house party nearby.

The suspects came up out of nowhere and parked directly in front of her car blocking it. Two black males got out of the vehicle with guns pointed at the women. The men yelled at the women to get out of the car. One of the males opened the driver’s side door and grabbed the woman pulling her out of her car.

One of the men tried to drive the car away but couldn’t get the car started. The second suspect jumped in the passenger seat and told his buddy to ‘just go.’ The thug tried to start the car and failed.

He grew frustrated, put the gun on his lap, and tried to start the car again.

The woman snatched the gun right off the carjacker’s lap.

She ran from the scene but the humiliated carjacker chased her, tackled her, and dragged her to the ground.

The woman had reached her limit with the awful thief. She turned and opened fire on the carjacker killing him with his own gun.

After she shot and killed one thug, the other felon opened fire on her but his aim was as good as his judgment and he missed multiple times.

She was able to hide out nearby until the cops came.

The cops later caught one of the surviving carjackers.

Officers arrived and found a deceased male adult bleeding from his head lying in street. The report said the man was wearing a black ski mask, jacket and jeans.

During the course of the investigation, detectives saw a vehicle of interest casing the area in multiple surveillance videos.

Detectives said Jaylin was a known associate with the deceased suspect.

Arrest documents said Morrison cased the victims, blocked their car with his, had two other associates get out of the car with masks and guns, removed the victims from their car, entered the victim’s car with the intent to steal it and attempted to steal the vehicle.

Elon Musk Proves Trump Twitter Ban Was Worse Than You Thought: “I think we’d have a hard time saying this is incitement, I also am not seeing clear or coded incitement in the DJT tweet”