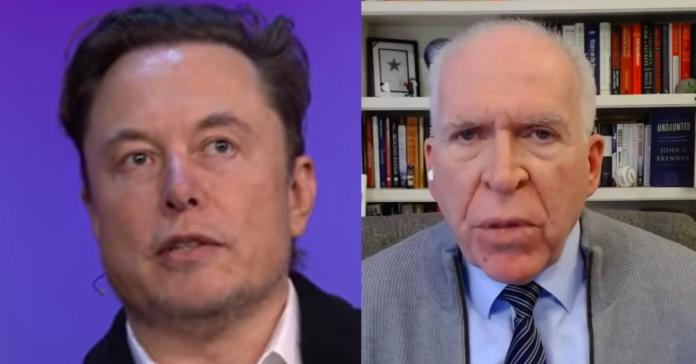 Brennan said: “Dr. Fauci is a national hero who will be remembered for generations to come for his innate goodness & many contributions to public health. Despite your business success, you will be remembered most for fueling public hate & divisions. You may have money, but you have no class.

“Good people in democracies need a more effective way to prevent attention-craving, emotionally immature, & highly devious individuals, esp those of means, from being socially, culturally, & politically destructive. We certainly seem to have far too many of them lately.”

Your house is glass

“Your house is glass.”

A Fox News reporter tweeted: “A huge migrant caravan of over 1,000 people crossed illegally into El Paso, TX last night, making it the largest single group we have ever seen.

“The city of El Paso reports Border Patrol now has over 5,000 in custody & has released hundreds to city streets. @FoxNews.”

Musk responded to the shocking video with, “Wow.”

A Twitter user asked Musk about getting booed in San Francisco when Dave Chapelle brought him onstage, Elon said:

“Technically, it was 90% cheers & 10% boos (except during quiet periods), but, still, that’s a lot of boos, which is a first for me in real life (frequent on Twitter).

But it was how Musk humiliated John Brennan that had everyone talking.

Technically, it was 90% cheers & 10% boos (except during quiet periods), but, still, that’s a lot of boos, which is a first for me in real life (frequent on Twitter).

Kyle Rittenhouse Blows Whistle: “The media didn’t just make up lies, they actually worked with old Twitter to ban the truth from their lies and then lied about it, crazy”