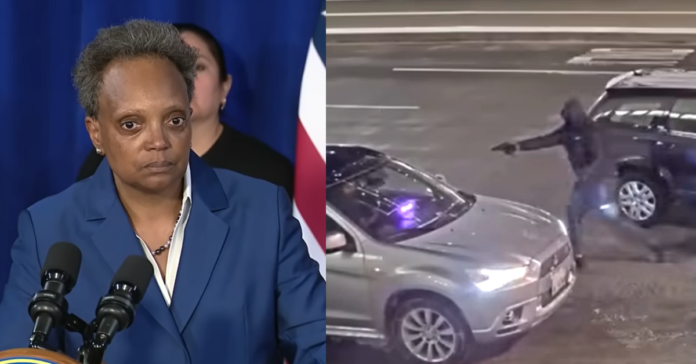 A concealed carry holder stopped an armed robbery crew from stealing his car early this morning in downtown Chicago. The permit holder shot two men during an exchange of gunfire in the heart of Chicago’s downtown and stopped a car theft in progress.

The victim was leaving the Cambria Hotel in the theater district when someone fired shots at him from a red SUV Chicago police said. The concealed carry holder returned fire sending the red SUV fleeing from the scene.

Another offender was inside the victim’s parked car. He got out and ran from the scene of the crime. But cops say he left a tool and a phone in his haste to get away.

Shortly after the concealed carry holder stopped the crime in progress, a red Jeep showed up at Northwestern Memorial Hospital.

A concealed carry holder shot two men during a possible auto theft or carjacking in the Loop overnight, according to preliminary information from the scene.

A 26-year-old man, who is now in police custody, walked into the emergency room for treatment of a gunshot wound to his knee.

Police say the Jeep had bullet holes in it and was abandoned in the the hospital emergency bay. Two ammunition magazines were found lying on the ground close to the red Jeep.

Around the same time a 24-year-old man walked into Lurie Children’s Hospital with a gunshot wound to his right buttock.

He was transferred to Northwestern hospital. He is in police custody.

According to CWB Chicago:

On Monday, a concealed carry hold shot three people who tried to rob him as he sat in his vehicle, authorities said. Prosecutors have charged an adult and two juveniles with that crime.

The driver of the crew’s getaway car remains hospitalized in critical condition with a gunshot wound to his head, according to prosecutors.

Last Friday, December 2, a Rogers Park business owner shot an intruder who broke through his office’s back door while he was working late. Charges have been filed against the alleged burglar.

A man is recovering after someone hit him in the head with a hammer as he walked in the Loop yesterday morning.https://t.co/KRVakYF0sJ

ICYMI: Chicago police have released surveillance images of a man who has been robbing women near the lakefront, then escaping in a U-Haul truck.