Jimmy Kimmel Tells Liz Cheney To Throw In Towel: “Nothing bad ever happens to Donald Trump” 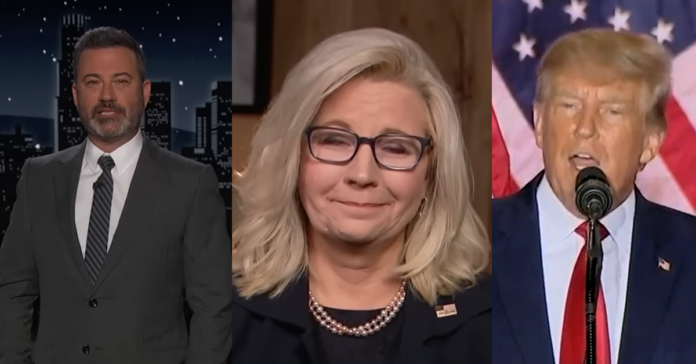 Hollywood star Jimmy Kimmel told Liz Cheney’s committee to throw in the towel saying nothing will happen to former President Donald Trump no matter what Cheney and the rest do because it will be ‘symbolic.’

He called Cheney and her committee a toothless ‘Neighborhood Watch group’ before saying “nothing bad ever actually happens to Donald Trump.”

He said: The other big news that came out of the House is that the January 6th committee — remember all those hearings that aired at even more random times than the World Cup soccer games?

“Well, not only is the House Select Committee expected to release their final report this month, they’re considering criminal referrals for Donald Trump and his associates.

“These would be largely symbolic, because of course they would be.

“Nothing bad ever actually happens to Donald Trump.

“But I guess we all knew the committee couldn’t prosecute Trump itself, but it’s a bummer to remember that Liz Cheney and her crew are basically just a Neighborhood Watch group hoping the cops show up after they file a report about a nut in a red hat urinating on their front lawns you know.

“How has he not been charged?

“It’s amazing how long this is taking.

“I mean, he’s not the Zodiac killer.

“He’s right there, at home in Florida, eating pork chops with Nazis! Go get him.

“Because of that a handful of Republicans are now working to move their party away from Trump, including Senator Mitt Romney, who said:

‘President Trump lost again, and I know a lot of people in our party love the president – former president –  but he is, if you will, the kiss of death for somebody who wants to win a general election.’

“Wow, the Mitt is hitting the Tan isn’t it.

“Mitt Romney is out of control.

The Trump Organization was found guilty of fraud… in a surprise to absolutely no one. pic.twitter.com/L0JZWGYSv9