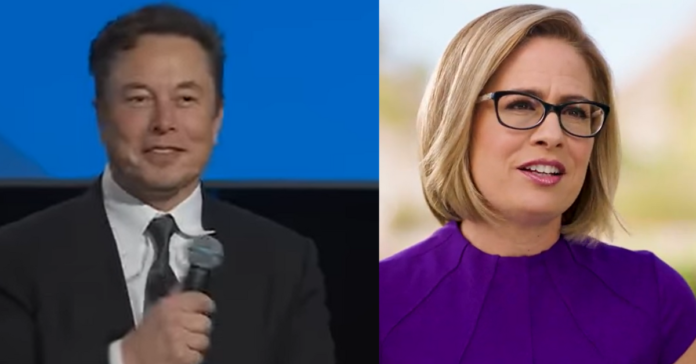 Twitter CEO broke his silence on the stunning political news of the day, Dem Senator Kyrsten Sinema left the DEm Party causing chaos in Washington. We don’t know how this changes the balance of power in the Senate but Sinema spends more than half her time in the chamber hanging out on the Republican side.

While the Dems and the media panicked over Sinema, Elon Musk applauded the move. He said:

“Good for @SenatorSinema. ! I hope more of our elected leaders act independently, aka in the interests of the people. Something I always admired about American legislators, at least historically, was that they would sometimes vote against the party line.”

“In a natural extension of my service since I was first elected to Congress, I have joined the growing numbers of Arizonans who reject party politics by declaring my independence from the broken partisan system in Washington and formally registering as an Arizona Independent.

“Over the past four years, I’ve worked proudly with other Senators in both parties and forged consensus on successful laws helping everyday Arizonans build better lives for themselves and their families. Becoming an Independent won’t change my work in the Senate; my service to Arizona remains the same.”

Good for @SenatorSinema! I hope more of our elected leaders act independently, aka in the interests of the people.

“Arizonans expect our leaders to follow that example – set aside political games, work together, make progress and then get out of the way so we can build better lives for ourselves and our families.

It’s no surprise that Washington, D.C., often fails to reflect that expectation.

Everyday Americans are increasingly left behind by national parties’ rigid partisanship, which has hardened in recent years.

Pressures in both parties pull leaders to the edges, allowing the loudest, most extreme voices to determine their respective parties’ priorities and expecting the rest of us to fall in line.

In catering to the fringes, neither party has demonstrated much tolerance for diversity of thought. Bipartisan compromise is seen as a rarely acceptable last resort, rather than the best way to achieve lasting progress. Payback against the opposition party has replaced thoughtful legislating.

Americans are told that we have only two choices – Democrat or Republican – and that we must subscribe wholesale to policy views the parties hold, views that have been pulled further and further toward the extremes.

Most Arizonans believe this is a false choice, and when I ran for the U.S. House and the Senate, I promised Arizonans something different. I pledged to be independent and work with anyone to achieve lasting results.

I committed I would not demonize people I disagreed with, engage in name-calling, or get distracted by political drama.

Americans are more united than the national parties would have us believe. We’ve shown that a diverse democracy can still function effectively.

Arizonans – including many registered as Democrats or Republicans – are eager for leaders who focus on common-sense solutions rather than party doctrine.

But if the loudest, most extreme voices continue to drive each party toward the fringes – and if party leaders stay more focused on energizing their bases than delivering for all Americans – these kinds of lasting legislative successes will become rarer.

It’s no wonder a growing number of Americans are registering as independents. In Arizona, that number often outpaces those registered with either national party.

When politicians are more focused on denying the opposition party a victory than they are on improving Americans’ lives, the people who lose are everyday Americans.

That’s why I have joined the growing numbers of Arizonans who reject party politics by declaring my independence from the broken partisan system in Washington.

I registered as an Arizona independent.

I offer Arizonans something different.

Some partisans believe they own this Senate seat.

This Senate seat doesn’t belong to Democratic or Republican bosses in Washington.

It belongs to Arizona, which is far too special a place to be defined by extreme partisans and ideologues,” she wrote.

Something I always admired about American legislators, at least historically, was that they would sometimes vote against the party line

Becoming an Independent won’t change my work in the Senate; my service to Arizona remains the same. Read my full Op-ed in the Arizona Republic 3/3 ⬇️https://t.co/P2JQXFT5IJ

Dem Senator Calls Out Joe Biden Over Brittney Griner Swap: ”Releasing Bout back into the world is a deeply disturbing decision”