Dem Senator Calls Out Joe Biden Over Brittney Griner Swap: ”Releasing Bout back into the world is a deeply disturbing decision” 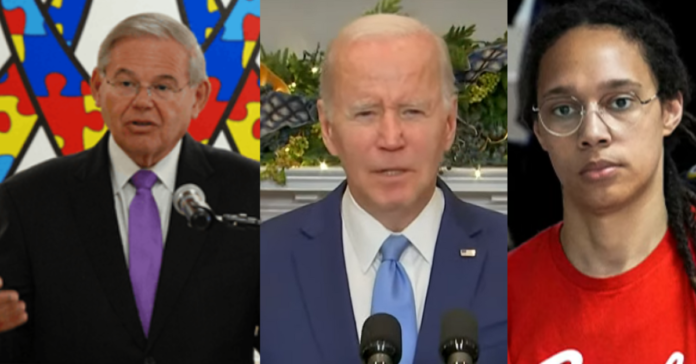 “The news this morning of Brittney Griner’s release is a welcomed development toward our collective efforts to secure the return of all those wrongfully detained in Russia. I can only image the pain and heartache she and her family have been going through since her detention almost ten months ago, and I join them in this moment of profound relief as she returns to her life here in the United States.

“To be clear, Ms. Griner should have been released immediately and unconditionally a long time ago. Putin has known that all along. This should be a moment of deep reflection for the United States government to recognize we have a serious problem with hostage-taking of Americans.

“The Russians and other regimes that take American citizens hostage cannot pretend that there is equivalence between the Brittney Griner’s of the world and people like Viktor Bout, the so-called ‘Merchant of Death.’

“Nothing could be further from the truth, and we cannot ignore that releasing Bout back into the world is a deeply disturbing decision.

“We must stop inviting dictatorial and rogue regimes to use Americans overseas as bargaining chips, and we must try do better at encouraging American citizens against traveling to places like Russia where they are primary targets for this type of unlawful detention.

“My heart also goes out to the families of other American citizens in Russian prisons and labor camps, including Paul Whelan.

“They have my renewed commitment and determination to use the power of the Senate Foreign Relations Committee to secure Mr. Whelan’s safe return and to continue fighting for the release of all Russian political prisoners, like Vladimir Kara Murza, and all other unjustly detained Americans,” he said.

“The Bout-for-Griner prisoner swap is not a trade, it’s an American surrender.

“This is not what American strength looks like. Terrorists and rogue states are smiling.”

“Paul Whelan should have been part of this deal,” said Sen. Jim Risch (R-ID).

“He is a Marine who fought for our country, and he is a hero.

“He has spent four years unjustly held and badly mistreated in Russian prisons.

“The Biden administration cannot forget him now that Griner has been released.”

“It’s been over 4 years since his imprisonment. How much longer must his family wait?

“There is no place for weakness when it comes to lives of innocent Americans.”

The Bout-for-Griner prisoner swap is not a trade, it’s an American surrender. This is not what American strength looks like. Terrorists and rogue states are smiling.

Never leave a marine behind. Never.