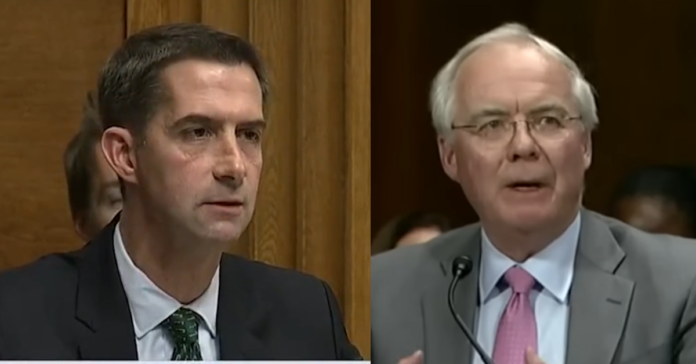 Sen. Tom Cotton, R-Ark., reminded Kroger Chair and CEO Rodney McMullen who’s boss after the businessman begged the Republicans for help after the Democrats said they wanted to regulate his company and block a merger he was planning.

Cotton was not pleased with Kroger after he learned it was sued by two former employees in Arkansas who were fired after they refused to wear aprons supportive of the LGBTQ+ community. Cotton said Republicans are not going to help companies that “silence conservatives and center-right voters.”

Cotton said: “You know, this situation reminds me a little bit of the situation Big Tech companies have found themselves in recent years. They’ve come to Washington because they fear regulation from our Democratic friends.

“Or action by the Biden administration and they expect Republicans, who are traditionally more supportive of free enterprise, to come to their defense.

“I’m sorry that’s happening to you. Best of luck.”

“I’ve cautioned them for years that if they silence conservatives and center-right voters, if they discriminate against them in their company, they probably shouldn’t come and ask Republican senators to carry the water for them whenever our Democratic friends want to regulate them or block their mergers.

“The CEO of Kroger forces his shelf-stockers and checkout employees to undergo left-wing indoctrination to work for him, then pays himself nearly 400x their salaries.

“When he comes begging for more money and power, send him to his Democrat friends for scraps.”

Conservative lawyer Briscoe Cain spoke for millions when he said:

Thank you for addressing the elephant in the room, Sen. Cotton. I worked for a major wireless company that relied on the Republicans for a huge merger,only to become one of the most woke companies in America.