Texas GOP Warns Joe Biden: “Texans are in imminent danger, and Texas leadership is right to use all powers under their authority to defend Texas’ border and its citizens” 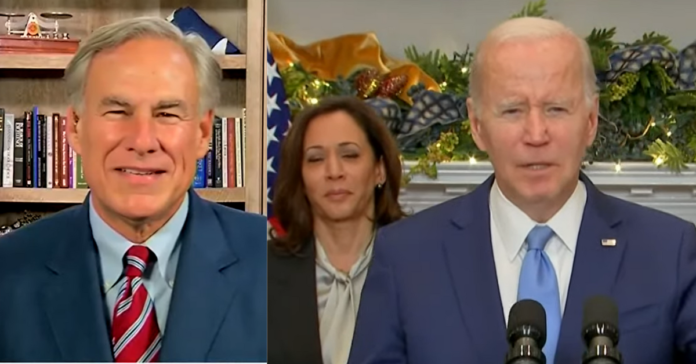 GOP lawmakers in the Lone Star State overruled President Joe Biden and released a blueprint for a secure border called the ‘Commitment to Secure the Border: a Framework by Texans for Texans.’

They wrote: “More than 4 million individuals have been encountered at our southern border since President Biden took office. The Biden administration has released between 1-2 million of these individuals into the interior – not including approximately 1 million known“gotaways” since the start of FY21.

“At least 98 people on the terrorist screening database were apprehended in FY22. Further, more than 24,000 lbs. of fentanyl have been seized since President Biden took office. Texans are in imminent danger, and Texas leadership is right to use all powers under their authority to defend Texas’ border and its citizens. Taxpayers in Texas are spending more than $3 billion on border security operations.

“Texans are being pummeled by a nearly two-year-long border surge – left to defend their lives and their property against violent criminals and murderous cartels.

“Fentanyl is killing tens of thousands of Americans and cartel-fueled crime is surging across the country. Customs and Border Protection agents and officers are strapped and hamstrung – rendered incapable of fulfilling their duties.

“House Republicans have made a Commitment to America to secure the southern border as part of our priority to create a “nation that is safe.”

“This is consistent with the American Security Task Force. As members of Congress representing Texans and the southern border we commit to the same and offer these solutions to fulfill the goals of the Commitment to America.

“We will not stand by while the Biden Administration knowingly pushes disastrous policies with complete disregard for what our state and country are enduring. We commit to paying Texas back for border operations and damages.

“We commit to forcing the administration to enforce our current laws and to leverage the power of the purse to ensure that it does.

“And we commit to immediately shifting policy to bring much needed security to our state and country. We commit to securing our southern border, and this is our framework to do just that.

“More than 4 million individuals have been encountered at our southern border since President Biden took office,” they wrote.

The first is a commitment to completing infrastructure at the border — including finishing the Trump-era border wall, which has largely stalled under the Biden administration.

They also want to aid Border Patrol recruitment and install 700 miles of roads along the border, while reimbursing Texas for border security expenses.

On the policy side, the lawmakers want to require the U.S. government to turn away all illegal immigrants if they cannot be detained and placed into systems like the “Remain-in-Mexico” policy which kept migrants in Mexico for their hearings.

They also want to see the defunding of all non-governmental organizations that they say encourage “the violation of our border security and related laws.”

“We are committing ourselves to secure our southern border; we will not accept anything less, and this framework outlines what it’s going to take to get the job done”