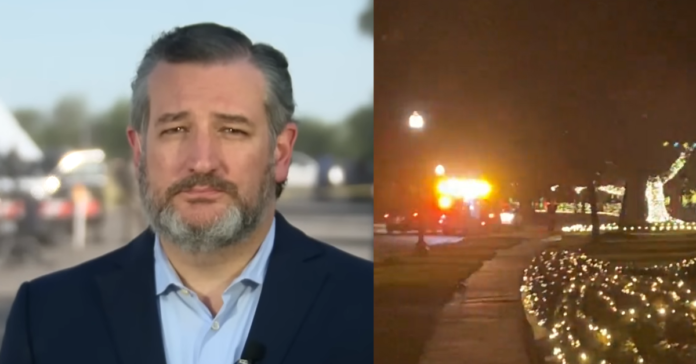 Sen. Ted Cruz says his teenage daughter is “okay” after cops were called to his Texas home Tuesday night for a medical emergency. Houston PD responded to Cruz’s house in Houston’s River Oaks neighborhood around 8 PM last night after receiving a report of a 14-year-old with self-inflicted stab wounds to their arm.

The teen was taken to the hospital.  Ted and his wife Heidi and their 2 daughters, ages 11 and 14. It was unclear if Ted was at home in Texas or was in Washington.

A representative for Ted Cruz said: “This is a family matter, and thankfully their daughter is OK. There were no serious injuries. The family requests that the media respect their daughter’s privacy at this time.”

UPDATE: A spokesperson from Texas Senator Ted Cruz’s office says, “This is a family matter, and thankfully their daughter is okay. There were no serious injuries.  The family requests that the media respect their daughter’s privacy at this time.”

Police could not say whether the call involved a member of Cruz’s family. The Texas Republican has two daughters.

Regarding a question about one of the senator’s daughters, they said that she’s OK and there were no serious injuries.

Emergency services are seen outside the home of U.S. Senator Ted Cruz amid reports that a 14-year-old girl was taken to hospital. It’s unclear if someone from his family is involved pic.twitter.com/RFlQhNWt5C

Praying for Senator Ted Cruz and his entire family, now let’s leave it at that and respect their privacy.

Elon Musk Fires Deputy General Counsel For Suppressing Information Important To Public: “In light of concerns about Baker’s possible role in suppression of information important to the public dialogue, he was exited from Twitter today”