Megyn Kelly Sets Keith Olbermann Straight: “You a terrible person, a mean guy, he really is a mean guy” 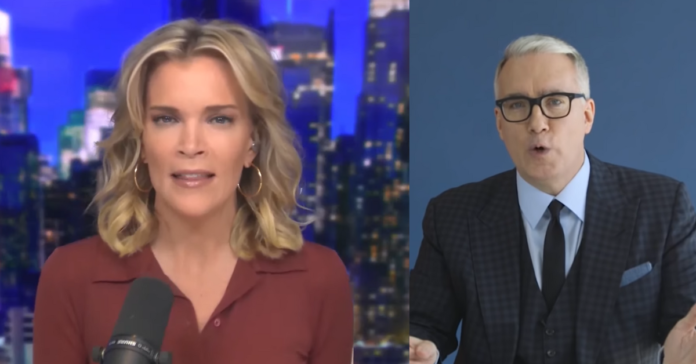 Megyn Kelly set Keith Olbermann straight after he accused his ex-girlfriend, MSNBC’s Katy Tur, of physical abuse in a segment on his podcast this week. Megyn said:

“It just leads him down a lane where he decided to tell about 25 secrets about Katy Tur. The segment is called something like ‘secrets I said I’d never tell.’ Well, that’s a great name for a segment, but it really makes you a terrible person.”

“I don’t know what’s happened there, but it’s very trainwrecky to watch an ex — both of these people are public figures — to go public with this list of grievances and try to take down a woman who’s clearly moved on, she’s married to somebody else, her career’s fine.

“His career seems, I don’t know. His podcast is very entertaining, I’m sure it’s doing.

“There’s something terribly ironic about pushing grievances while insisting that you kept these secrets for a very long time, and you’re chastising her for talking about a medical procedure in public while you’re just airing all of your dirty laundry.

“I certainly wouldn’t dismiss claims that you’ve been attacked, that there was some sort of domestic violence in your relationship.

“The fact that you carried on a relationship afterward and were very friendly until you decided not to be? This is just really strange. It’s a bizarre sort of way to snap.

“I should temper my criticism, because I don’t really know Keith Olbermann at all.

“I just know that when he makes headlines on Twitter or on his show, nine times out of 10, he’s being absolutely caustic about somebody with whom he was once close.

“It’s one thing to have strong opinions about the news, God bless, that’s what he gets paid to do.

“Anyway, the whole thing is awkward,” she said.

Keith said on his podcast:

“On January 22, 2017, Katy Tur of MSNBC asked me to write her Trump book for her. She was serious and there are receipts.

“So all of this time, I have remained silent about the nearly three years she and I lived together and the eight years after that I remained her good and loyal friend.

“I have remained silent even though six days after her emergency appendectomy in 2007, she started punching and slapping me, with real intent to do harm, because the living room wasn’t clean enough in our place.

“How exactly do you even try to defend yourself against a woman 125 pounds lighter and a foot shorter than you?”

Elon Musk: “Data was hidden and some may have been deleted, but everything we find will be released, tune in for Episode 2 of The Twitter Files tomorrow”