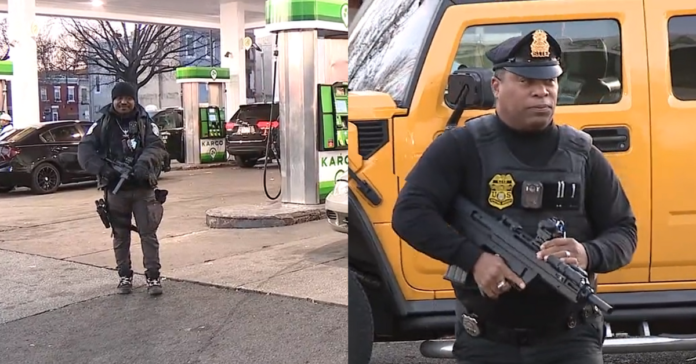 The owner of a North Philadelphia gas station reached his limit with the out-of-control crime in the Dem-run city and hired armed guards to patrol his property.

Neil Patel hired a private security company, Pennsylvania State Agents, to patrol his KARCO gas station at Broad and Clearfield streets. He has a daily armed presence and at least two armed agents on the premise nightly.

Patel said crime targeting his customers, his store, and his employees was so rampant he had to take this extraordinary step. Patel said there was a shooting at the gas station on Easter Sunday, people are shoplifting and selling drugs daily, and an ATM was stolen several weeks ago.

But the cops are slow to respond he said so he had to take matters into his own hands.

A North Philly owner says he’s had enough violent crime at his gas station so he’s hired these guys to protect his customers and store.

Does this make you feel safer? Or uncomfortable. pic.twitter.com/ZOXvUxTvyW

“They are forcing us to hire the security, high-level security, state level. We are tired of this nonsense: robbery, drug trafficking, hanging around, gangs,” he added.

Patel said crime at his business has stopped since he hired armed guards.

“We’re Pennsylvania State Agents and we’re not security. Basically, what we do is security details when the public calls upon us when the police can’t be there,” said Andre Boyer.

“The first week there was tension from the public seeing someone with an AR shotgun walking around.

“I have my license to carry, I’m always ready to go for myself, so it’s like whatever.

“It’s nice and safe for me.

“I get my juice, go to my car without somebody else jumping in it,” said Rock.

Philadelphia gas station owner Neil Patel says he’s had his business robbed, his car vandalized, and an ATM stolen. He’s fed up with incessant crime threatening his employees and his customers, so he has hired heavily armed guards to protect his business. https://t.co/3jGZ8lrbAM