Kirstie Alley Said She Was ‘Blackballed’ Over Her Support of Donald Trump: ‘It is a real blackballing situation” 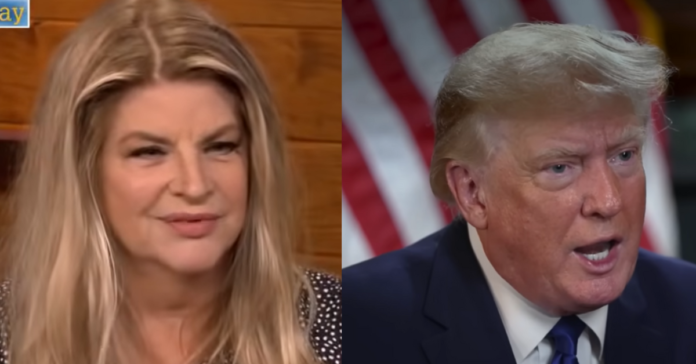 Kirstie Alley, who died from cancer on Monday at age 71 was “blackballed” by Hollywood for her support of former President Donald Trump. During an interview with Tucker Carlson last year, Alley came clean saying:

“People go, ‘You’re so brave.’ I go, ‘No, I think I’m stupid.’ Because honestly, it is a real blackballing situation. You can be cooking meth and sleeping with hookers, but as long as, apparently, you didn’t vote for Trump.  I feel like I’m in The Twilight Zone a bit, with the whole concept of it.”

Alley said when she endorsed Trump in 2016: “HELLO BOYS! this is my formal endorsement of @realDonaldTrump & I’m a woman! (last I checked) And Rudy, U R amazing!”

She said in 2020: “I’m voting for @realDonaldTrump because he’s NOT a politician. I voted for him 4 years ago for this reason and shall vote for him again for this reason.

On Tuesday the former president paid tribute to Alley writing on Truth Social: “Kirstie was a fantastic person and a big supporter of America First & MAGA. She will be greatly missed!!!”

Other celebrities offer their tributes as well. John Travolta said, “Kirstie was one of the most special relationships I’ve ever had. I love you Kirstie. I know we will see each other again.”

“A sweet soul pass on in Kristie Alley. Sad, sad news. Prayers for all her family.”

Kelsey Grammer said: “I always believed grief for a public figure is a private matter, but I will say I loved her.”

Her children issued a statement that said: