John Bolton: “If the current GOP presidential candidates don’t repudiate Trump, I’m prepared to get in the race” 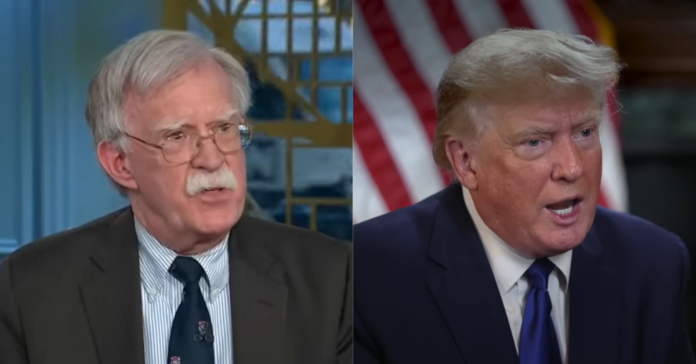 Former national security adviser John Bolton said he will “seriously consider” challenging former President Trump for the GOP’s presidential nomination in 2024 if other GOP candidates don’t step in and stop him from winning again.

Bolton said: “We’ve got perhaps a dozen or more potential presidential candidates looking to 2024. I think every one of them, before they declare their candidacy, should say, ‘Donald Trump was wrong. We repudiate him. He doesn’t belong in the Republican Party.’

“And, honestly, if they don’t, there’s one thing that would get me to get into the presidential race, which I looked at in previous elections. It would be to make it clear to the people of this country that Donald Trump is unacceptable as the Republican nominee.

“If I don’t see that, I’m going to seriously consider getting in.

“I think the voters, the Republican voters, people who choose the Republican nominee, nearly 95 percent disagree that Donald Trump is more important than the Constitution.

“I’m afraid there’s some that would stick with Trump on this.

“What does a candidate have to lose by appealing to 95 percent of the base of the Republican Party?

“I actually think most Republican elected officials in Washington disagree with Trump on this, but they’re intimidated,” he added.

Asked for his views on the 2024 race and what his potential campaign might look like, Bolton predicted that national security issues will dominate that election cycle “The isolationist virus that Trump has let loose needs to be addressed, as well,” he added.

Bolton described his politics as “pretty libertarian” and said he was “not a social conservative.”

He added that he believes the 2024 presidential field will be “very crowded,” and that he might make a decision on whether to run “earlier than some would think.”

When you challenge the Constitution itself, that is un-American. If the current GOP presidential candidates don’t repudiate Trump, I’m prepared to get in the race. pic.twitter.com/mKnU2tDhyc

“Well, of course it is disqualifying.”@AmbJohnBolton weighs in on Former President Trump’s call to terminate the Constitution pic.twitter.com/xAOFkYs2nG