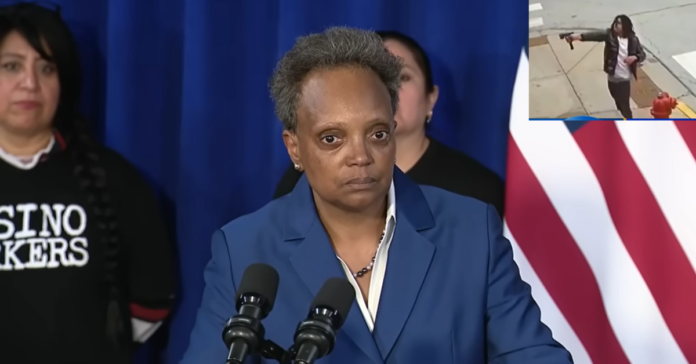 Around 5:53 a.m. three robbers got out of the Kia and one pointed a gun at a man and demanded his belongings. The concealed carry holder turned the tables on the armed thugs and put an end to the crime spree by shooting one goon in the temple and another felon in the shoulder.

The man shot in the head was in surgery at Mt. Sinai Hospital. He was listed in “bad” condition. The person shot in the shoulder is in critical condition. Incredibly, there was another armed robbery crew targeting the same Chicago neighborhoods around the same time.

The concealed carry holder put an end to one crew but the other continued committing crimes.

A concealed carry has shot two people who tried to rob him on the West Side this morning, minutes after their car was used to commit a string of armed robberies in Wicker Park: sourceshttps://t.co/ELTHEcBTZA

Four gunmen robbed a man in the 1600 block of North Damen around 5:25, taking his wallet and power tools. They fled in a gray car that had a trash bag over a broken rear side window, a report said.

Three men emerged from the same car and robbed a woman at gunpoint in the 1600 block of North Hermitage around 5:28 a.m.

Three men emerged from a gray car and robbed a group of people at a bus stop on the corner of Ashland and North avenues around 5:25 a.m.

Two of those victims, both women, called the police after they arrived at work in the West Loop.

Another victim was robbed at gunpoint in the 2200 block of North Milwaukee in Logan Square around 5:39 a.m.

A delivery driver was robbed outside his work location in the 600 block of North Western Avenue at 5:43 a.m. by four men.

Two people were robbed outside their office in the 2000 block of North Milwaukee around 5:46 a.m.

There’s a big twist to yesterday’s shooting of would-be robbers by a concealed carry holder.

Two of the teens who tried to rob him also tried to carjack an Uber driver in April — but the Uber driver shot their accomplice dead.https://t.co/Gpy1b2AnVV

After 2 men were killed at a gathering in Chicago on Saturday, supporters gathered outside Christ Hospital.

A fight broke out at the vigil, prosecutors say, and a six-time felon who was on bail shot and killed another man in the hospital parking lot.https://t.co/9Z0BeEHP25

A 67-year-old woman was knocked to the ground and carjacked outside a West Loop Target store this morning.https://t.co/S6nFCmfEvP

John Bolton: “If the current GOP presidential candidates don't repudiate Trump, I'm prepared to get in the race”