Kevin McCarthy: “Adam Schiff will no longer be on the Intel Committee when I become Speaker” 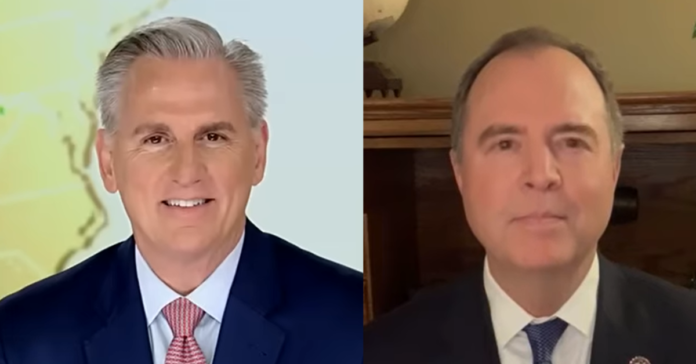 House Minority Leader Kevin McCarthy (R-Calif.) went on “Sunday Morning Futures” with Maria Bartiromo and said he will remove Rep. Adam Schiff (D-Calif.) from the House Intelligence Committee if, as expected, he becomes Speaker in the next Congress.

Kevin said: “Another change you’re going to get, Adam Schiff will no longer be on the Intel Committee when I become Speaker. I promised that more than two years ago.

“Democrats also used the intel community as well to lie to the American public. Should those people keep their clearances? Should those people still be allowed to have information? If they’re going to be political individuals, then, no, they should not.

“And this is just the tip of the iceberg of what we need to investigate going forward.

“What Elon Musk has been able to do, now we know why the White House wanted to fight so strongly against him owning Twitter.

“All he’s done is put out the truth.

“Now we need to start looking at Facebook, at Google.

McCarthy said he will remove Democratic Reps. Eric Swalwell (Calif.) and Ilhan Omar (Minn.) from their committee posts in an earlier interview.

“Kevin McCarthy has no ideology.

“He has no core set of beliefs.

“In addition to Schiff, the Republican leader has said he’ll remove Reps. Eric Swalwell (D-CA) and Ilhan Omar (D-MN) from their committee posts.”https://t.co/H9V54HX5Xs

Doocy: “When did he go to the border?”

KJP: “He is taking action.”pic.twitter.com/9lrIantSwH

Judge Throws Book At Michael Avenatti In Last Criminal Case, Sentences Him To 14 Years In Prison