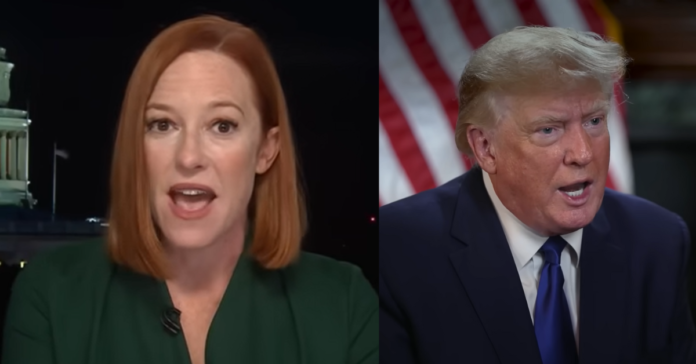 Appearing on Meet the Press, Psaki said Trump is still the favorite to win the GOP nomination because he ‘has some evil charisma that helped him win the nomination’ before. CHUCK TODD: Yamiche, people say, “We’ve been here before with them. Is this time different?

YAMICHE ALCINDOR: – the fact that we even have to ask that question shows you that there’s still this grip that former President Trump has on the party, and his popularity among some in the base, these extreme MAGA people who are still supporting him.

We were here, and the Access Hollywood tape, when everyone found out.

That they had a daughter and a mother, and were saying that they didn’t want former President Trump to be the nominee.

WATCH: Former Biden Press Secretary Jen Psaki says “Trump has some evil charisma” that could help him win the Republican nomination for 2024.@jrpsaki: “Democrats and sane Republicans underestimate Trump at their own peril.” pic.twitter.com/u66Dy67570

We were here again after January 6 when we saw people leaving the White House in droves.

And then everyone turned around and at least the senators who had the power to say, “We’re going to convict you in this impeachment,” they all decided, “Actually, this is the line that we’re not going to cross.”

So I think, yes, does it feel different? It feels different because we’ve been fighting antisemitism and racism for a long time.

But I still think that it’s too early to say whether or not he’s completely out of the ability to win this nomination.

JEN PSAKI: I mean, I think Democrats and sane Republicans underestimate Trump at their own peril because in order for Trump not to win the nomination there has to be a better alternative.

Ron DeSantis, this man – he’s either the savior or he’s currently at his peak.

Mike Pence, with all due respect, didn’t exactly light the world on fire politically before he was selected by Donald Trump to be his running mate.

So the question is, who’s the alternative?

Trump has some evil charisma that helped him win the nomination.

The nomination process is long.

What is going to happen here? And my view is people should not underestimate him.

Donald Trump launched his third bid for the White House just 19 days ago.

Already, his campaign — and the Republican Party — are being tested as he refuses to disavow the antisemitic and racist part of the party he has aligned himself with for years. pic.twitter.com/7xj2ODOf3v

Chris Christie's Niece Arrested For Assaulting Six Police Officers: "During her arrest, she injured 6 deputies, biting one and kicking another in the groin”