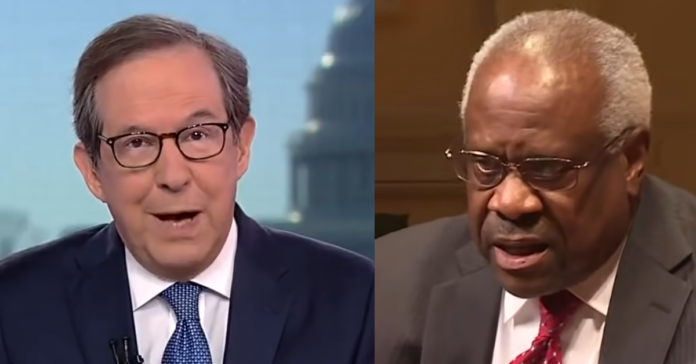 WALLACE: Right. Okay. Well, Clarence Thomas responded, and I think it’s fair to say that he played the race card, and he played it hard. Again, take a look.

[CLIP of Thomas speaking] This is a circus, so national disgrace. And from my standpoint, as a black American, as far as I’m concerned, it is a high tech lynching for uppity blacks who in any way deign to think for themselves.

WALLACE: But what struck in addition to that, what struck millions of people who were riveted to the television, and I can’t overstate what a big cultural event this was, was the way you were treated by the 14 white men, Republicans and Democrats.

Who were the Senate Judiciary Committee. Let’s take a look at some of that.

[CLIP of Senators speaking] You testified this morning in response to Senator Biden that the most embarrassing question involved this not too bad. Women’s large breasts.

That’s a word we use all the time. All we’ve heard for 103 days is about a most remarkable man.

It seems to me it didn’t really intend to kill him. But you might have…are you a scorned woman, do you have a martyr complex?

HILL: Well there are two things with Thomas, it was the idea that he could play the race card as the victim against a black woman who will, you know, came from the same history whose family had been threatened with lynching.

Real lynching, not high tech lynching whatever that was supposed to mean, and that he could be successful.

That in a sense, he was attempting to alienate me from black people that sort of take over weigh any kind of, you know, respect or any kind of sympathy that black people would have for me.

And that’s really difficult because we know now that there was a whole history of sexual violation of African American women that didn’t get in, in the discussion at all.

That wasn’t part of the discussion.

I don’t think the Senate committee could have heard that. They understood what happened to black man, and the reality and brutality of lynching.

But I don’t think they had a clue about the experiences of black women.

And that, to me, says that the 14 men who were there should not have been leading a discussion.

They should not they didn’t have any idea of what they were even talking about.