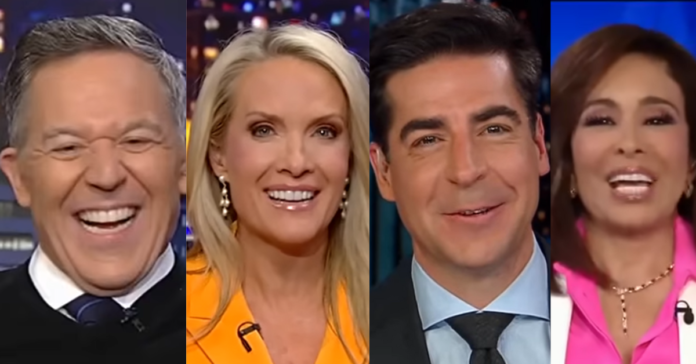 Fox News’ hit show The Five continued to make ratings history after finishing November as the number one show in all of cable news. The Five earned the top spot with viewers for the eighth consecutive month and has finished first in cable news for the last 11 out of 12 months.

The program averaged 3.7 million viewers, 466,000 in the 25-54 demo and 285,000 in the 18-49 demo, outpacing every show on CNN and MSNBC across the board. What is remarkable about The Five’s streak is the show airs during the day, not in primetime. No other non-primetime show has been able to do what The Five has done.

Fox News was the most-watched network across the political spectrum with more Independents and Democrats watching Fox News than MSNBC and CNN in total day and primetime viewers in the A25-54 demo.

Fox News was also the number one cable news network among Hispanic and Asian households across total day and primetime with viewers.

FOX & Friends finished November with 1.5 million viewers crushing the newly launched CNN The Morning and MSNBC’s Morning Joe combined in viewers and the key demo. The hit show beat every offering on CNN in total viewers and in the 25-54 demo.

“Gutfeld! delivered its highest-rated month since launch in viewers and A25-54, topping all of late-night television across the board in viewers with 2,322,000 viewers.

Gutfeld beat Stephen Colbert in the younger A25-54 demographic for the full month for the first time with 397,000.

At 5 PM/ET, The Five continued as the number one rated show with viewers for the eighth consecutive month and finished first in cable news for the last 11 out of 12 months. The roundtable program averaged 3.7 million viewers, 466,000 with 25-54 demo and 285,000 in the 18-49 demo, outpacing every show on CNN and MSNBC across the board.

From 4-6 PM/ET, FOX & Friends FIRST garnered 632,000 viewers and 112,000 with A25-54. FNC’s signature morning show FOX & Friends (weekdays, 6-9 AM/ET) finished November with 1.5 million viewers and 237,000 in the demo, easily outpacing the newly launched CNN The Morning and MSNBC’s Morning Joe combined across both categories.

Dem Lawmaker Reaches Limit With Party, Switches To Republicans: “I look and see how I can best representative my constituents”