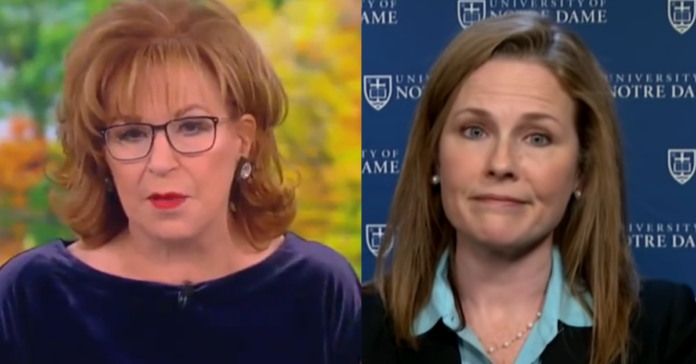 Joy Behar was forced to issue a groveling apology on ABC’s The View after the co-host of the hit show accused Supreme Court Justice Amy Coney Barret of being in a hate group.

Joy wanted Amy to recuse from some case before the court and this is how she made her case: “Now, here’s my question. She is, you know, a religious person. She belongs to the People of Praise group, which the Southern Poverty Law Center has labeled a hate group, and their founder has questioned the so-called separation of church and state.

“They believe that sex should occur only within marriage and, of course, between a man and a woman. They’ve got very specific things that they believe.

But Joy was wrong, the Southern Poverty Law Center does not have it on its list of hate groups.

A day late and a dollar short.
Joy Behar is made to walk back a false statement she made yesterday when she lied about Justice Amy COney Barrett being a member of a “hate group.”
“I just got them mixed up with another group. It was inaccurate.” pic.twitter.com/6Y1c4kqID0

On Tuesday’s show, Whoopi Goldberg began the show by saying:

“Before we get to hot topics, Joy, do you want to clarify something?”

“I have to clarify something I said yesterday.

“I want to correct something I said on-air when I stated that People of Praise had been deemed a hate group.

“I just got them mixed up with another group, it was inaccurate.

“So I don’t think that’s right, I have to say, you know, sorry about that.

“Anyway, I conflated them.”

“It’s easy to do. You know, sometimes I call Joy, Sara,” Goldberg joked.

“Because we look so much alike,” Sara Haines said.

“Because you look identical to each other,” Goldberg said.

.@TheView is #1 – The Most Watched Daytime Talk Show in America. Congrats to the team and THANK YOU to our loyal viewers! #TheView pic.twitter.com/O1ozJ8vuWg

REMEMBERING FLEETWOOD MAC’S CHRISTINE MCVIE: #TheView co-hosts look back on the legacy of Fleetwood Mac’s Christine McVie, who died at the age of 79. https://t.co/cVclFZQmjA pic.twitter.com/iDRUp6vrNV