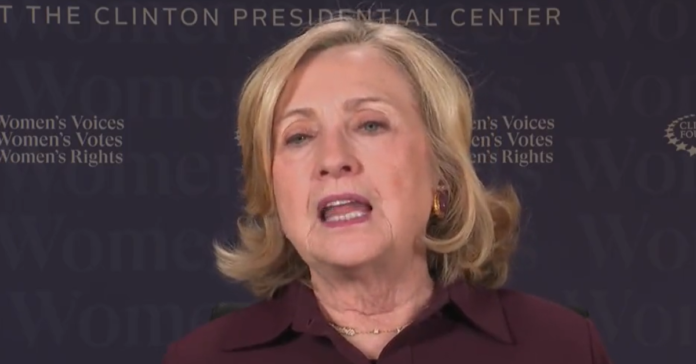 Failed presidential candidate Hillary Clinton was called ‘a disgrace’ on social media after she compared pro-lifers in America to the brutal regimes in Afghanistan and Sudan.

Speaking from the Women’s Voices Summit at the Clinton Presidential Center in Little Rock, Arkansas, Hillary said: “We have come a long way since I made that statement back in 1995 on so many fronts.

“But we are also in a period of time where there is a lot of pushback and much of the progress that has been, I think, taken for granted by too many people is under attack.

“Literally under attack, in places like Iran or Afghanistan or Ukraine, where rape is a tactic of war, or under attack by political and cultural forces in a country like our own, when it comes to women’s health care and bodily autonomy.

Hillary Clinton is a disgrace. https://t.co/lxuprkSuPi

“It’s so shocking to think that in any way we’re related to poor Afghanistan and Sudan.

“But as an advanced economy as we allegedly are, on this measure, we unfortunately are rightly put with them.”

“This struggle is between autocracy and democracy from our country to places we can’t even believe we’re being compared to.

“One of the stories ingrained in my mind is that often black women, even women of education and affluence like Serena Williams, come close to dying when she gives birth because people are not paying attention to her,” Clinton said.

“Today, women across the United States and around the world face challenges to their freedom,” Stephanie Streett, executive director of the Clinton Foundation, said in a statement.

“Through the ongoing Women’s Voices Exhibition and this week’s summit, we will examine the historical struggle to defend and advance women’s rights by bringing together a wide range of voices, perspectives, and solutions to accelerate the pace of progress toward equality, ‘once and for all.’

“Hillary Clinton is a disgrace,” tweeted Nile Gardiner of the Heritage Foundation.

“We need to be standing with the people of Iran,” says @HillaryClinton. “I would not be negotiating with Iran on anything right now – including the nuclear agreement. I think that, frankly, the horse is out of the barn.” pic.twitter.com/ImIRnB68aR

“Women’s rights are human rights, once and for all.”— Secretary @HillaryClinton | #TBT

We’re convening #WomensVoices tomorrow in Little Rock to advance the global fight for women’s rights and we want to know – what do her iconic words mean to you today? https://t.co/YYg2RT6TiS pic.twitter.com/G8AwGpauvG

Elon Musk To Spill Beans Tonight: “What really happened with the Hunter Biden story suppression by Twitter will be published on Twitter at 5pm ET”

Bette Midler Makes Gross Confession That Explains A Lot: “I Bathe Once A Month, F*ck You”