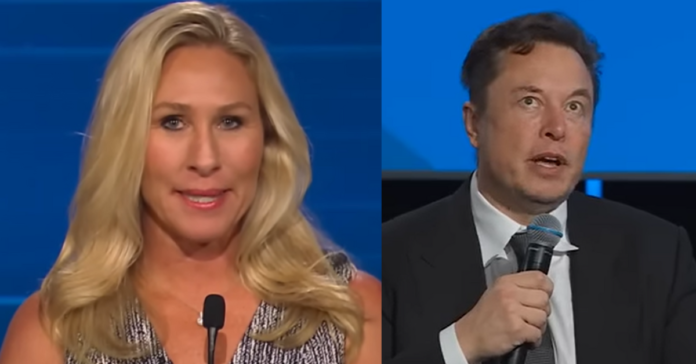 GOP Congresswoman Rep. Marjorie Taylor Greene made her move and invited Twitter CEO Elon Musk to come to DC and reveal what in the hell was going on at Twitter when they banned accounts like hers and Trump’s at an Oversight Hearing in the 118th Congress

A Twitter user said: “Raise your hand if you think @ElonMusk should provide previously suspended Twitter users with all internal discussions pertaining to the decision to permanently ban their account along with the exact reasoning upon their reinstatement to Twitter.

Greene said: “I’d like to invite Elon to share that with those of us who were permanently banned at an Oversight Hearing in the 118th Congress.  That would be very kind of him and helpful in order to know who else we should invite. (subpoena)”

Musk also threatened Apple and Google that he would build an alternative phone and crush their monopolies if they ban Twitter from their app stores.

🙋‍♀️
I’d like to invite Elon to share that with those of us who were permanently banned at an Oversight Hearing in the 118th Congress.
That would be very kind of him and helpful in order to know who else we should invite.
(subpoena) https://t.co/TRWJmdvMYr

Musk was asked by a Twitter user about possible app store bans if he continues to push free speech.

“If Apple & Google boot Twitter from their app stores, @elonmusk should produce his own smartphone. Half the country would happily ditch the biased, snooping iPhone & Android. The man builds rockets to Mars, a silly little smartphone should be easy, right?”

Musk answered: “I certainly hope it does not come to that, but, yes, if there is no other choice, I will make an alternative phone.”

Musk later linked to the below article about Congress potentially cracking down on Apple and Google. From CNBC:

The House Judiciary subcommittee on antitrust’s groundbreaking report on Big Tech said Apple has “monopoly power” over software distribution on iPhones, which allows it to generate large profits from the App Store and extract rents from developers.

The 450-page report from the Democratic majority is the culmination of a 16-month investigation that also examined competitive practices at Amazon, Facebook and Google and included the CEOs of the four giants testifying over videoconference in August.

The report, released Tuesday, recommends that dominant technology platforms, including Apple, be barred from entering “adjacent lines of business” and should not be allowed to give preference to their own services or products.

But the report is also complimentary of Apple in some places: It also noted that Apple’s mobile ecosystem has produced significant benefits to consumers and app developers.

This is devastating. Owning a small business is the American dream and they are being destroyed by our government leader’s bad decisions.

Kayleigh McEnany Warns Dems Elon Musk Plans To Expose Secret Internal Discussions At Twitter About Censorship: “I was Press Sec at the time when Twitter also banned my personal account after sharing the story, would love answers”