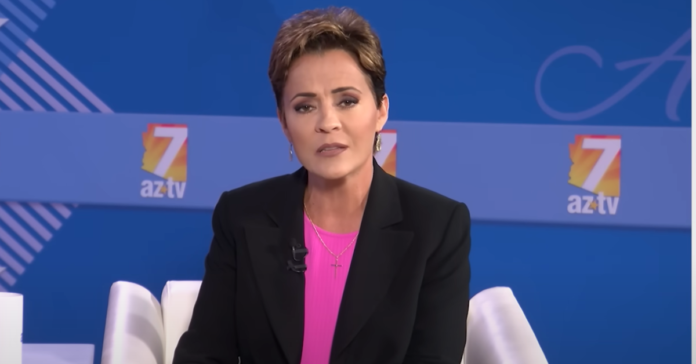 Republican Arizona gubernatorial candidate Kari Lake’s campaign has sued Maricopa County and its election officials after she lost a close election. Lake is demanding county officials respond to the campaign’s public records requests before the county certifies its vote canvass on Monday.

The lawsuit says: “Plaintiff desires that every lawful vote be properly counted and every voter who was eligible to vote be allowed to vote.

“Because Defendants were unable or unwilling to conduct a reconciliation of voter check ins against ballots cast of each polling center on election night in accordance with Arizona law and have now unlawfully refused to produce public records in response to two public records requests regarding how they administered the election, Plaintiff cannot determine that every lawful vote will be properly counted.

“The records Plaintiff requested in response to the numerous issues with Defendants’administration of the election are consistent with a parallel demand by the Arizona Attorney General for answers to questions about the Defendants’ actions.

“Given instances of misprinted ballots, the commingling of counted and uncounted ballots, and long lines discouraging people from voting, as demonstrated in the attached declarations, these records are necessary for Plaintiff to determine the full extent of the problems identified and their impacts on electors,” the 19-page lawsuit says.

Abe Hamadeh, who lost the race to be Arizona’s Attorney General by less than 1,000 votes, also sued.

“The voters of Arizona demand answers and deserve transparency about the gross incompetence and mismanagement of the General Election by certain election officials.

“Pervasive errors by our election officials resulted in the disenfranchisement of countless Arizonans who had their voices silenced.

“Arizonans deserve to have an election system that is transparent and fair and right now we have neither.

According to AZ Central:

Republican attorney general candidate Abe Hamadeh has filed a legal complaint asking a judge not only to prevent certification of the Nov. 8 election results but, if appropriate, also to certify the election to Hamadeh.

The complaint was filed Tuesday in Maricopa County Superior Court by Hamadeh, who was joined by the Republican National Committee.

The contestees include the candidate now leading the attorney general race, Democrat Kris Mayes, as well as Arizona Secretary of State Katie Hobbes and other elections officials.

Hamadeh trails Mayes by 510 votes with all of Arizona’s ballots counted.

The race is already headed to an automatic recount, per state law, because the vote differential between the candidates is less than half a percentage point.

The recount will occur after the certification of election results Dec. 5.

Hamadeh is asking the court to prevent the certification of the attorney general’s race as it stands now.

It asks for “an injunction … prohibiting the Secretary of State from declaring the Contestee elected to the office of Arizona Attorney General or from issuing to Contestee a certificate of election.”

Last year, Thanksgiving looked a lot different on my deployment overseas, 8200 miles from home. Good to be back in Arizona, but I still miss my Army family.