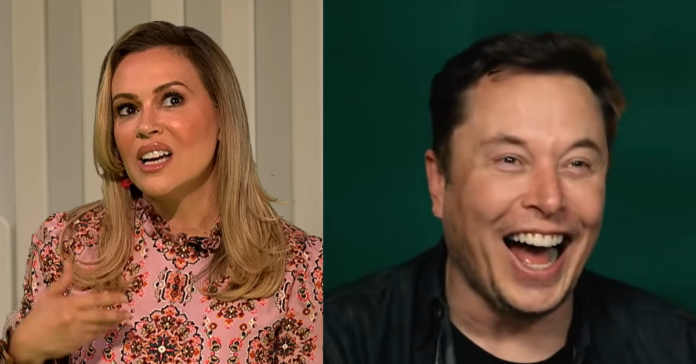 “I gave back my Tesla. I bought the VW ev. I love it. I’m not sure how advertisers can buy space on Twitter. Publicly traded company’s products being pushed in alignment with hate and white supremacy doesn’t seem to be a winning business model.”

She was mocked on Twitter with one user informing her that, “Volkswagen was founded in 1937, as part of Nazi leader Adolf Hitler’s vision to enable German families to own a first car. During World War Two, the Wolfsburg-based firm manufactured vehicles for the German army, using more than 15,000 slave labourers from concentration camps.”

According to the US Holocaust Memorial Museum:

Like many other industries, automobile manufacturing in Germany was strongly influenced by the Nazi regime. Mirroring the regime’s antisemitic policies, the German General Automobile Club ADAC (Allgemeiner Deutscher Automobil-Club e.V., or ADAC) expelled Jewish members in 1933. Jews were deprived of the right to drive automobiles after Kristallnacht in 1938.

Car ownership and travel were intended to be another part of the Nazi vision of the Volksgemeinschaft (People’s Community). In 1942, propaganda minister Joseph Goebbels described the future of Germany as that of “a happy people in a country full of blossoming beauty, traversed by the silver ribbons of wide roads, which are open to the modest car for the small man.”

Mirroring this aim, the Nazi “Strength through Joy” (Kraft durch Freude, or KdF) organization, which sought to highlight the advantages of National Socialism through leisure and travel, chose as one of its major efforts to promote a “People’s Car” (Volkswagen) for the German public.

In a country where car production still focused primarily on luxury models and where only one German in fifty owned an automobile, the car would cost just 999 German Reichsmark, while the program offered a savings plan to make such a vehicle affordable.

Adolf Hitler’s admiration for technology in general and for automobiles in particular fueled this effort. Cars were, he said, “mankind’s most marvelous means of transport.”

In 1934, Hitler suggested a basic, fuel-efficient vehicle that could transport two adults and three children and whose engine would be powerful enough to traverse Germany’s new Autobahnen. The design for a “People’s Car” was undertaken by the famed engineer Ferdinand Porsche, who based it on a model he pioneered in 1931.

On May 26, 1938, Nazi dignitaries gathered near Fallersleben in northern Germany to lay the foundation stone for the Volkswagen Works.

The Führer himself was present, predicting that this Volkswagen, initially known as the Kraft-durch-Freude-Wagen, or KdF-Wagen, would be “a symbol of the National Socialist people’s community.”

The Volkswagen plant eventually became a massive complex known as the “City of the Kdf-Car” [“Stadt der Kdf-Wagen”] and was expected to produce at least 1.5 million cars annually.

In reality, the plant had only just started small-scale production of what would become the Volkswagen Beetle when the company halted civilian production with the onset of World War II.

In the end, the vast majority of Germans who completed their savings books never received their long-awaited People’s Cars, as Volkswagen went into military production.

The war posed a serious obstacle for Volkswagen, as the plant had been designed for the production of civilian vehicles. From its inception, it had never had a sufficient workforce. In search of labor, the massive complex at Fallersleben quickly began to deploy forced labor. Indeed, Volkswagen was among the first companies to take advantage of the forced labor of Soviet prisoners of war.

The factory employed a variety of categories of workers, including German employees and migrant workers, but also prisoners of war, concentration camp inmates (including Jews), and in increasingly large numbers Soviet and Polish civilian foreign forced laborers known as “Ostarbeiter” [“Eastern workers”]. A first concentration camp on the site, Arbeitsdorf, was established on factory property in April 1942. Forced laborers eventually made up approximately 60% of the workforce at the City of the Kdf-Car.

The company actively sought out forced labor from the concentration camp system. One VW plant engineer traveled to Auschwitz and selected 300 skilled metalworkers from the massive transports of Hungarian Jews in 1944. In addition, 650 Jewish women were transferred to assemble military munitions.

Civilian forced laborers supplied the remaining sum of the complex’s workforce. By May 1944, the number of “Eastern workers” at the complex had swelled to more than 4,800 individuals, half of them women.

Some of these workers had been recruited, but the majority had been forcibly deported from their homelands to augment the Reich’s critical labor shortage in agriculture, manufacturing, and the armaments industries.

Like concentration camp inmates and Soviet prisoners of war at the facility, these workers were poorly housed, underfed, and labored under deplorable and often dangerous conditions. A Polish forced laborer described his feelings upon arrival at the City of the KdF-Car.

🤣
Volkswagen was founded in 1937, as part of Nazi leader Adolf Hitler’s vision to enable German families to own a first car. During World War Two, the Wolfsburg-based firm manufactured vehicles for the German army, using more than 15,000 slave labourers from concentration camps